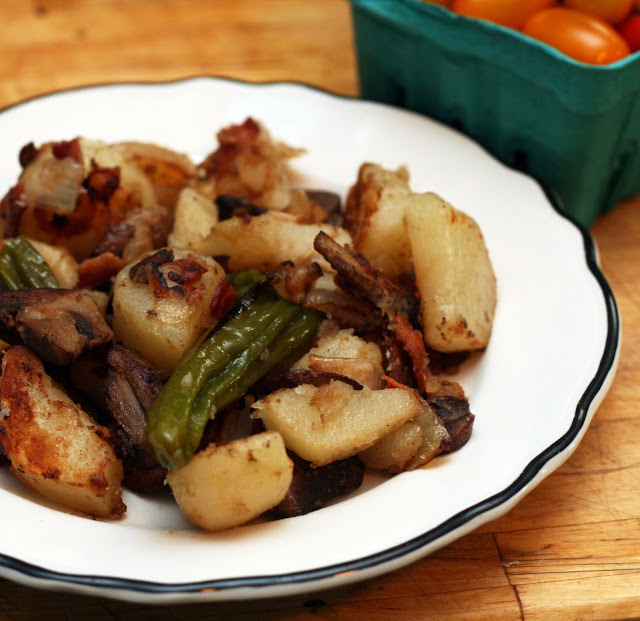 Parboil the potato in a medium pot. Drain and set aside.

Heat a large skillet. Add the bacon and cook until crispy. Remove the bacon to a paper towel lined plate. Drain all but 2 tablespoons of bacon grease out of the pan. Return to flame. Add the onions, peppers, mushrooms and potato. Saute until the potatoes are golden on both sides and the pepper is soft and browned in spots. Stir the bacon bits back in, sprinkle with salt and pepper and serve immediately, topped with a poached or fried egg if desired.

Normally I am an home fries purist but I wanted to make something slightly more robust today becasue we are going to a dinner tonight where we are not sure if there will be enough food. Better to be a little full going in than light-headed with hunger later, I think! I served this as a main meal topped with a sunny-side up egg and it made a little too much for two people. I think if you had it as a side, it would easily serve four. The shishito peppers are fairly sweet (although I did bite into one really hot one!) but added a slight heat to the dish which was fun and the meaty crimini mushrooms helped bulk the potatoes up. Perfect for brunch at home! Or brinner!