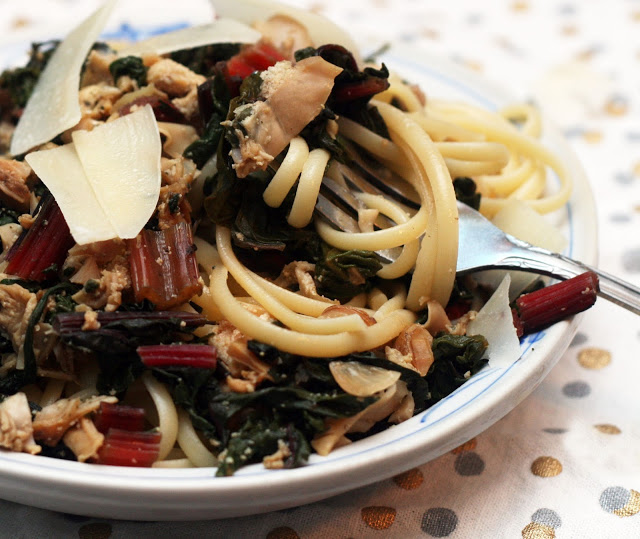 Directions:
Preheat oven to 475. Arrange the clams in a single layer in a rimmed baking pan. Roast for 6-8 minutes or until the clams have opened. Using tongs, separate the clams from the shells. Discard shells and unopened clams. Chop clams and set aside. Reserve 1/4 cup clam juice.

Meanwhile, saute garlic, onion, greens and pepper until the greens are starting to wilt. Add the clam juice and cover. Cook about 10 minutes or until the greens are nearly fully wilted then stir in reserved chopped clams and saute 1-3 additional minutes. Toss with pasta. Serve with a sprinkle of grated or shaved parmesan.

It must be clam season because my local grocery store had 4 different kinds of clams on sale this week! I bought mahogany clams because while littleneck are more frequently used in pasta dishes, mahogany (also known as ocean quahog, golden neck or black clams) have a slightly stronger clam flavor and are often much cheaper than littleneck. I bought 50 of these clams for under $8 here in Baltimore. I find chopping them makes them just as easy to eat as littleneck and the juice they make is more flavorful which makes for a tastier “sauce” for this pasta. It is tricky to find recipes using mahogany clams so I knew I had to post this! Both arugula and  Swiss chard are in season now so it was an easy choice when it came to deciding which recipes to use. Their robust flavor held up to that of the clams without overpowering them. I also used fresh cayenne peppers from our garden for a bit of spice but a healthy pinch of red pepper flakes would work well also. I love a thrifty recipe that includes seafood, don’t you?