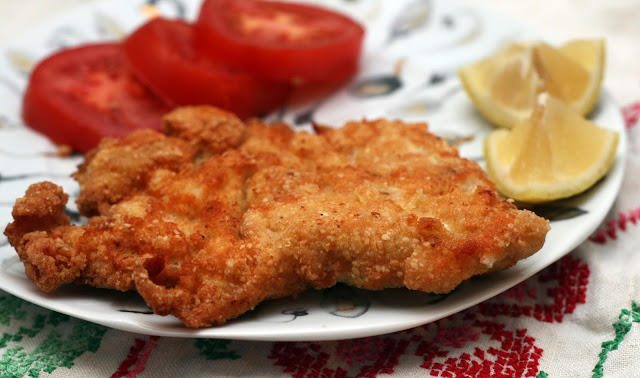 Directions:
Heat 1/3 inch Thrive™ Algae Oil in a low, wide pan. Meanwhile, whisk together the egg and mustard in a shallow bowl. Set aside. Pour the flour and matzo meal onto two seperate plates. Dredge each piece of chicken in the flour then dip into the egg mixture and then dredge in matzo meal. Fry 2-5 minutes, flipping once, until golden brown and cooked through. Drain on paper towel lined plates. Serve with lemon wedges.

*If the breasts are very thick, butterfly them first. I pounded mine between two sheets of parchment paper with a rolling pin.

I’ve already shared one recipe I created inspired by Israeli TV show, Srugim, about four single 30-something modern Orthodox friends. That beet-dumpling soup was what one of the female characters, Yifat, made several times for Shabbat. She did most of the cooking for the group but on the rarer occasions the male characters had Shabbat at their apartment or brought a dish, they always served schnitzel. There is even one scene where the two brothers, Nati and Roi debate the merits of the eating the last schnitzel their mother made (and froze) before she died. It being Israel and keeping kosher, the schnitzel they were talking about was made of chicken, not pork. Since frying is one of the things we are compelled to do at Hanukkah, I thought this would a perfect time to have another Srugim inspired meal.

Since you are frying thin cutlets very quickly, it is important to use oil with a high smoke point. Coincidentally, right before Hanukkah, the folks at Thrive™ Algae Oil contacted me about trying out their new, neutral-tasting oil made from algae. With a smoke point of 485 degrees, it seemed perfect for frying. Plus Thrive™ Algae Oil has the highest level of monounsaturated (“good”) fat, and the lowest level of saturated (“bad”) fat compared to other oils which helped ease my mind a bit when it came to making a second fried meal in less than a week! Now, I served my schnitzel hot but in the show, they normally served it at room temperature so I think that would be good as well! It also made a great sandwich on some challah.