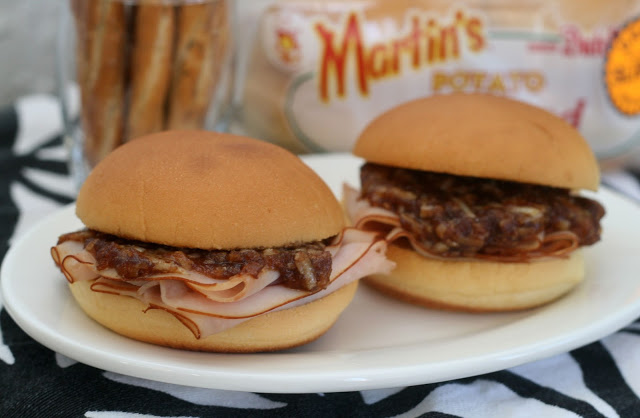 In a large bowl, mix together the apple butter and cheddar until smooth with the paddle attachment of an electric mixer. Scrape into a bowl and refrigerate 1-2 hours or until well chilled.
Preheat oven to 350°. Evenly divide the turkey among each roll. Spread the apple butter mixture on top of each roll. Close. Wrap individually in foil and bake 10 minutes or until the spread has melted. Serve immediately or transport in a 6-quart slow cooker to share.

I’ve been a Musselman’s apple butter blogger for a while now and it has been fun developing recipes using their apple butter so when they approached me to develop and game-day-worthy recipe using Martin’s potato rolls I thought it would be a neat opportunity. to make something different. I use Martin’s rolls pretty much exclusively anyway (check out pretty much any slider or burger recipe on this blog and you will see a Martin’s roll). Now we are not big sports fans ourselves but I know this is the time of year people are on a look out for recipes that are tasty, quick and easy to transport. I got the idea from these from a wedding we attended where they had foil-wrapped burgers in chaffing dishes ready for people to take home with them for a post-wedding snack. Now most people do not have chaffing dishes but most people have a slow cooker which can work in a similar way. I wanted to keep it simple and savory so I made a spread of Musselman’s sweet-spicy apple butter and extra sharp cheddar, filled them with turkey (although I bet ham would be good too!), wrapped them in foil to melt the cheese and then transported them in a slow cooker. It isn’t necessary to even turn on the slow cooker but if you are leaving them out over an hour or two, using the “keep warm” setting is advisable. The perfect make-and-take recipe for game day!