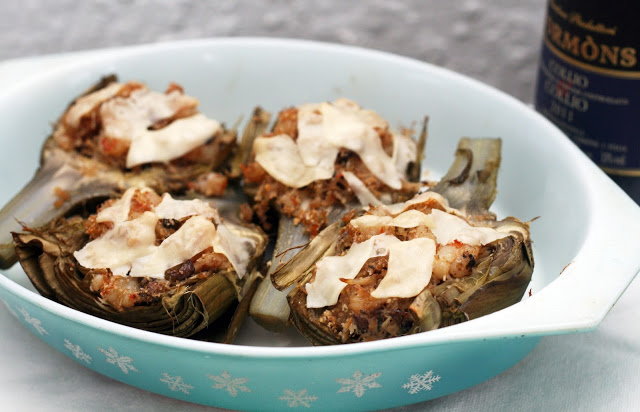 Preheat oven to 350. Spray or grease a 2-quart baking dish, set aside.

Heat a small amount of canola oil in a skillet. Saute the shallot until softened. Add the shrimp, crab, mushrooms and saute until the shrimp is nearly cooked through. Season with salt and pepper. Add the stock and simmer until the shrimp is fully cooked and the liquid has mostly evaporated. Allow to cool slightly. Scrape into a bowl and stir in the grated Parmesan and bread crumbs. Stir to combine. Set aside.

Scoop out the choke of the artichoke, if needed. Place the artichokes, cut side up, on the dish in a single layer. Spoon 1/3-1/2 cup of filling into each artichoke. Top with shaved Parmesan. 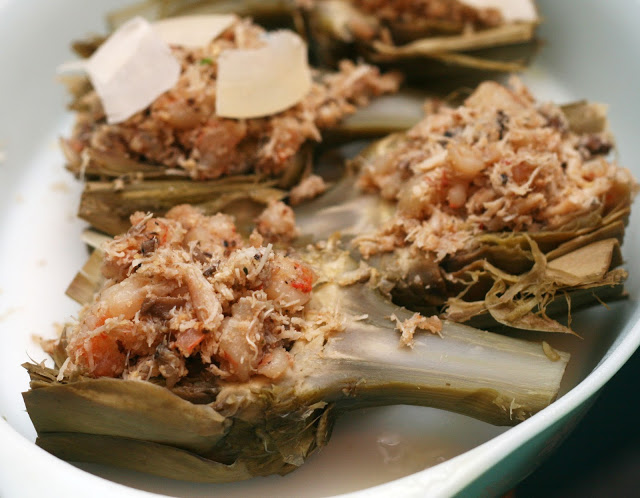 Bake for 10-15 minutes or until the cheese is melted and the stuffing and artichoke is heated through.

*Steam the artichokes in the Instant Pot or the old-fashioned way.

I’ve seen so many recipes for stuffed artichokes that call for starting with raw artichokes and baking them for 40 minutes and even up to an hour. Who has time for that? I came up with this recipe that provides all the flavor but in a fraction of the time. I started with a steamed artichoke so you don’t have guess if the artichoke is fully cooked (the hardest part of a baked stuffed artichoke, I think) and while it crisps up in the oven, it doesn’t need to full cook so you can have this whole dish on the table in about 20 minutes. The result was perfection! Packed with both seafood and artichoke flavor this was a great change from the normal and easy enough for a weeknight. 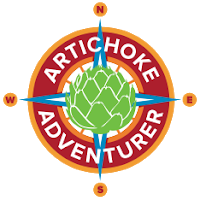 Special thanks to Ocean Mist Farms for the artichokes. From March 18 to April 16, they are hosting a contest where you can win a trip for two Monterey, California on June 4-6, 2016 and attend the Castroville Artichoke Food and Wine Festival. Enter here!