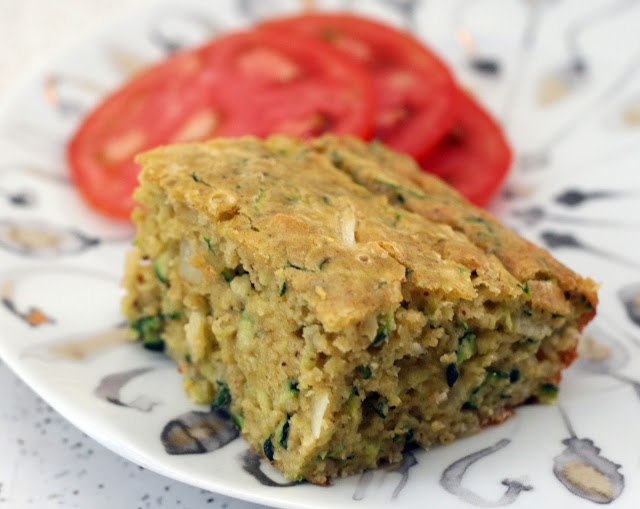 Preheat oven to 350. Squeeze dry zucchini if needed. Saute the onion in a skillet using a small amount of olive oil until translucent. Remove from heat and allow to cool.

Add the zucchini, cooled onion, eggs, Old Bay, oil and cheddar to a medium bowl or the bowl of a stand mixer. Mix, using an electric mixer until well combined. Mix in the flour and baking powder until a pancake-like batter forms. Spray with cooking spray or grease an 8×8 inch pan. Pour into prepared pan. Bake 45 minutes or until fully cooked (just few dry crumbs when a toothpick is inserted in the center) and golden brown on the bottom. Allow to sit in pan for 10 minutes on a wire rack before slicing and serving.

This is sort of a mash-up of the old favorite “impossible pie” made with Bisquick and an Australian dish I’ve encountered called “zucchini slice”. Impossible pie is so named because it seems impossible; you basically mix meat, fruit or vegetables with Bisquick and bake it and it magically forms a crust. Zucchini slice is sort of a cornless corn bread made with zucchini and sliced into squares. Both sounded pretty good to me so I thought I’d come up with my own version. I dropped the Bisquick in favor of flour and baking powder and used an 8×8 inch pan rather than a pie plate for easy slicing and serving. I had to add Old Bay because well, it is summer in Baltimore. The end result was ridiculously light and fluffy, almost souffle-like in texture. We couldn’t resist going back for seconds and (ahem) maybe thirds. It was a great light meal with a small salad or sliced tomatoes.