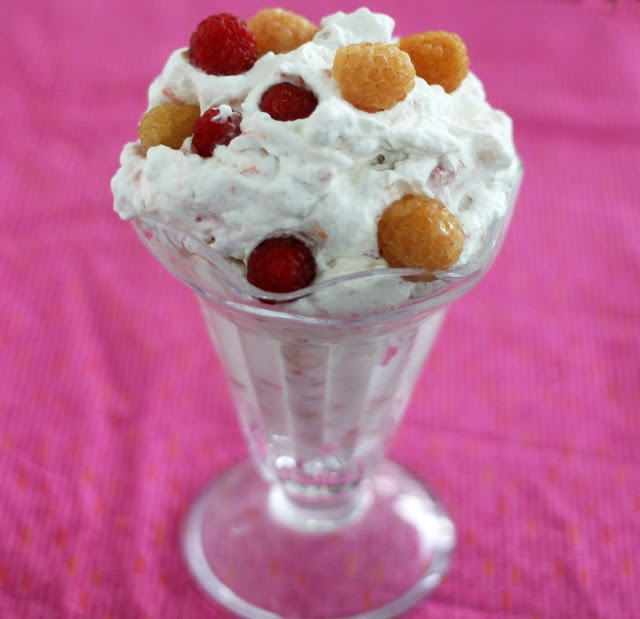 In the bowl of a stand mixer or in a mixing bowl using a hand mixer beat the cream and sugar together until soft peaks form. Meanwhile, lightly crush 1/2 of the raspberries (I did this by hand but the back of a spoon will do) and set aside. When the peaks have formed, remove the bowl from the mixer and use a large spoon to gently fold in the crushed raspberries (do not thoroughly incorporate) without deflating the cream. Crumble the meringues over the mixture and gently fold them in. Divide into bowls. Top with remaining berries. Serve immediately or refrigerate 1/2 hour. Best eaten the day it is made.

One of the biggest disappointments of my trip to England last year is that when we were in Windsor, a mere footbridge away from Eton during strawberry season, we did not get a single chance to eat Eton Mess. It was a major goal of mine for the trip. At least I got to see the castle.

There is a popular story that when at Eton cricket match a dog knocked over the prepared dessert, meringue and strawberries (I’m assuming a pavlova) crushing it and to salvage it, an enterprising chef tossed it with some whipped cream and served it anyway. The truth seems to be that some chef started selling it in the Eton snack/sweets shop in the 1930s but I like the dog story better.

Traditionally it is made with strawberries but our yard is overflowing with golden and red raspberries so I thought I’d make it using raspberries instead. The raspberries crushed much more easily than strawberries that made the dessert (pudding!) even quicker to make.

OMG is so good! Simple, even though I did make the meringues from scratch so that took some time, but surprisingly light tasting and full of fresh raspberry flavor. I loved the pockets of chewy meringue in the fluffy, creamy, fruity whipped cream.  I can’t wait to make it again.