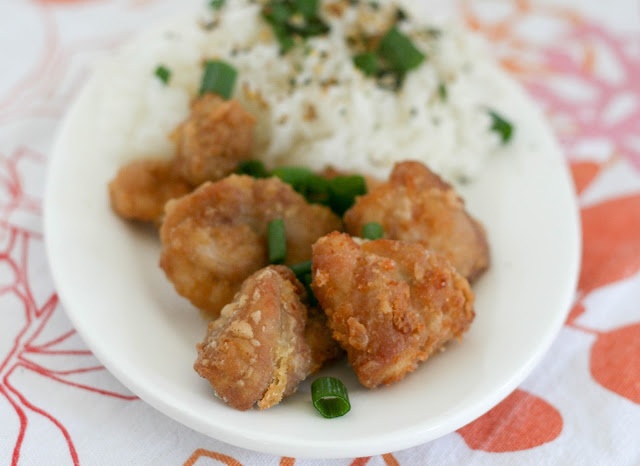 to serve (if having as a meal):
cooked Japanese rice
your preferred furikake (I buy this variety pack)
diced scallions or spring onions

Meanwhile, heat 1/2 inch of canola oil in a large, heavy-bottomed pan. Whisk together the flour and potato starch in a medium bowl. Toss the chicken bits in the flour mixture to coat. Fry, turning once halfway through, until golden brown, about 8 minutes. Drain on paper-towel-lined plates. Serve immediately with furikake and scallion topped rice.

*Find this in a well-stocked market that sells Japanese or Jewish ingredients.

I’ve had a craving for karaage for a while now but Baltimore is oddly lacking in Japanese restaurants. We have quite a few sushi restaurants but the majority are Korean owned (which is totally fine, but the nonsushi menu items are more likely to be bulgogi than izakaya-style snacks) an a couple of ramen places but no place that sells good karaage. So, of course, I had to make my own! My favorite way to have it is with a bunch of other snacky foods like various kushiyaki, pickled vegetables etc but since we are dining at home and frying chicken requires a bit of attention, I just serve it as a main dish with some rice. It would make a great party food if you double or triple the recipe as well.

The chicken is very crispy and flavorful thanks to the gingery marinade. The potato starch is really important to get the light, crisp crust so try and find it if possible. It is sold in pretty much any Asian grocery store (especially Japanese or Korean ones in my experience) or in regular stores normally near kosher foods because it can be used in making latkes and some Passover dishes. Cornstarch can be substituted but the results aren’t quite the same.