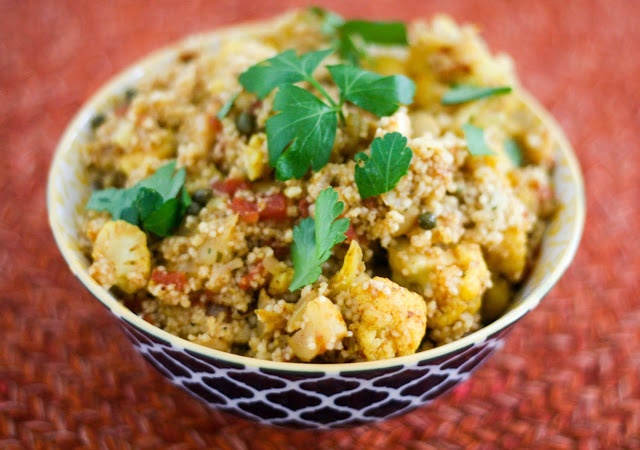 Cook couscous according to package instructions*.

Meanwhile, saute the onion and cauliflower until both are soft and starting to brown, in a large skillet. Add the beans, tomatoes, spices, and capers and saute until warmed through. Stir in cooked couscous and cook briefly, until all is heated through and the liquid had evaporated. Garnish with parsley.

*I normally toss some lemon zest or lemon pepper seasoning and some dehydrated onions into the recommended broth or water.

I’ve been off couscous for about a decade. I’ve made pearl couscous a few times but the tiny couscous? No thank you. I’ve even avoided it in restaurants but really, that has more to do with the fact that it often has other things, like raisins,  in it that I would prefer not to eat.

Anyway, I’ve decided to end this self-imposed embargo when inspecting a package of it at Aldi, I was reminded of how quickly it is to make, much quicker than pasta and rice. So I’ve been experimenting with it again.

Moroccan flavors are the obvious choice for this sort of couscous so I pulled out my trusty jar of ras el hanout (how awesome is it that McCormick makes it now and you can find it in the regular supermarket?) which always reminds me of Ra’s al Ghul of DC Comic fame but isn’t a supervillain but rather a mixture of a ton of aromatic spices and is popular in Northern African cuisine. I guess chickpeas would have been a natural choice but I’m a rebel and went with one of my old favorites, the Great Northern Bean but you could use chickpeas or cannellini beans if you wish. I used canned tomatoes with green chiles (i.e. Rotel, although I used a generic version) for some flavor and spice and my old friend cauliflower. The result was a well-spiced side or even main dish that was oddly tasty and satisfying. 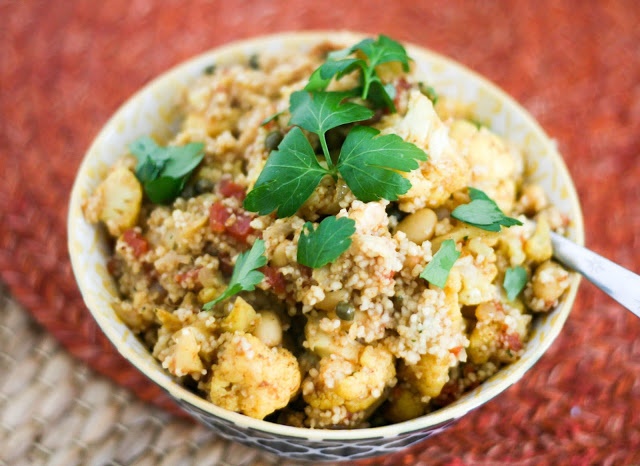