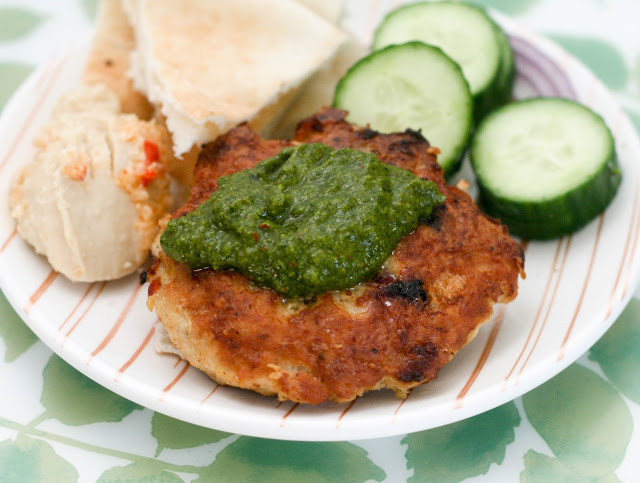 Mix together all of the kofta ingredients until well combined. Form into 6 small flat patties. Heat a fair amount of canola oil in a large skillet, cook the koftas until cooked through, flipping once, about 5-8 minutes on each side. Drain on paper towel-lined plates.

*Trader Joe’s has a version they call zhoung sauce or make your own!

I recently came across an article asking whatever happened to sun-dried tomatoes which was a bit silly, in which chefs confessed to still liking them and even renaming them to make them more palatable to diners on menus. While I admit, they are a bit past when they were the new and exciting ingredient (we had them on pesto pizza the year we did the ’80s for NYE) I would argue they are even more popular today because I can find them in more places and in more varieties than I could even ten years ago. I know this because finding them for that pesto pizza was oddly difficult but every regional and national chain in the area has them packed in oil and one or two varieties of “dry” sun-dried tomatoes packed in nothing but air and plastic. I try to keep a bag in my fridge for whenever I need a bit of concentrated tomato flavor. Tomato season is so short and it’s nice to have that flavor for more than a couple of months a year.

I decided to make these koftas with another ’80s fave, feta, use chicken instead of beef (yet another ’80s touch) and update it with the trendy yet not new spice du jour: za’atar. What can I say? I’m a renegade. You could serve these as burgers or sliders but I kept them small and served them as part of a sort snack plate with leftover zhug drizzled on, and some hummus and pita. It really is a good alternative to full sit-down dinner–it had one fresh, hot element but I prepared everything else ahead of time so it only took about 20 minutes to get dinner on the table.