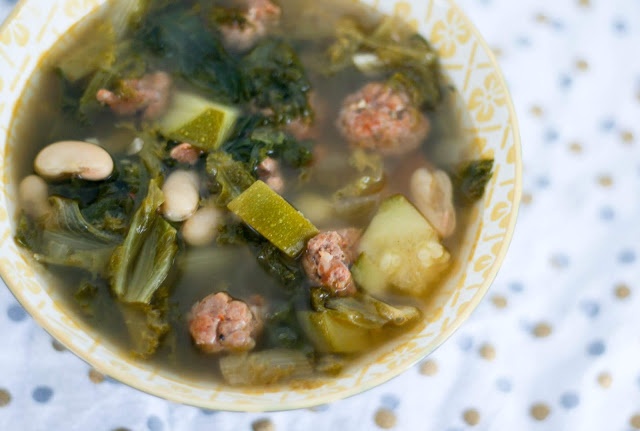 Roll the sausage into 1/4 inch balls. In a large, heavy-bottomed stock pot, saute the sausage until browned on all sides and nearly fully cooked. Remove to a paper towel-lined plate and set aside.

Drain off some of the grease, leaving about 1-2 tablespoons in the pot. Saute the zucchini, onion, and garlic until the onion is translucent and the zucchini is nearly fully cooked, about 5-10 minutes. Add the escarole and saute until it starts to wilt. Add the remaining ingredient, including the sausage balls and simmer for 20 minutes or until the escarole is soft and the sausage is 100% cooked through. Sprinkle with Pecorino Romano and serve.

We have had such a hot, humid and incredibly rainy summer so when it finally was below 85 for more than a few hours, it felt downright chilly. I went to a new grocery store that just opened up and among other things, they had escarole. Why escarole can be hard to find, I don’t know. We have a pretty large Italian population and things like fennel and every kind of Italian deli meat and cheese known to (wo)man are pretty easy to find but escarole, not so much. This store had not only escarole but curly endive which is very nearly the same thing. Fancy greens!

Anyway! I was excited to see it but then brought it home and had nothing to do with it. It’s one of my favorite greens in a soup because it doesn’t become slimy (ew) and maintains a bit of it’s texture lots of its flavor and sturdiness. Since we are nearing on the end of August and it was only about 80 out, I decided to go for it and make something that seems fall-ish (although fall does not begin for another month!) and a bit hardy. Since zucchini (along with escarole) is in season now, I added that to the soup to bulk it up a bit. Leafy soups always leave me a bit hungry even when they have chunks of yummy locally made sausage in it. I really loved how the soup came out, it was filling but did have a light flavor about it–perfect as we slip into cooler days.

Weird Tip: My husband has trouble heating homemade soup up at work for lunch (it never seems to come out correctly) so he used the broth from a bowl of soup to make rice and then topped it with the remaining solid ingredients to make a slightly brothy dish that reheats nicely in the microwave.