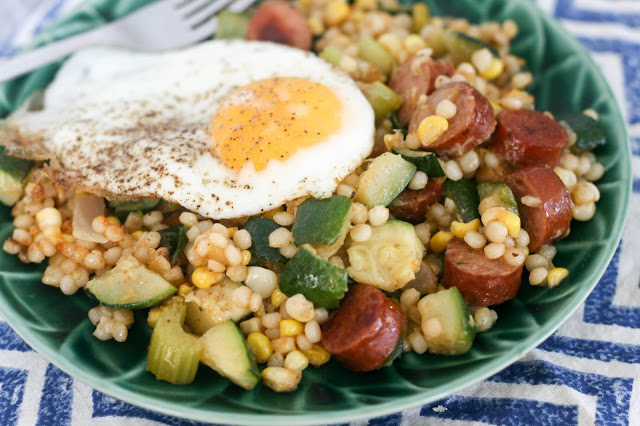 Directions:
Bring 1 1/4 cup of water to a boil. Add couscous, cover and simmer 8 minutes or until covered.

Meanwhile, heat a small amount of oil in a skillet. Saute the sausage until browned. Add the onion and pepper and saute until the onion is softened. Add remaining vegetables and spices. Saute until the vegetables are soft. Remove from heat. Stir in the couscous. Serve.

It has been a trying few weeks here lately. Not the least which is that our porch roof leaked so we had to take care of that which was an unexpected and unwelcome surprise!

The weather has be awful, alternately very rainy or very very humid and sunny and nothing in-between. The local produce has really suffered. We’ve barely had one good peach, nectarine, tomato or plum. This is the only time of the year we eat any of those things of course so this is extra disappointing! I wait all year for them! The corn has been okay though and these zucchini are from my mother’s garden and were quite good so I made this sort of couscous meets hash thing. Originally I didn’t put an egg on it but I realized that my camera lens had fogged up when I took the initial picture so I took the picture this morning when I had some leftovers for breakfast. I think the egg added something though! The dish is very simple but flavorful thanks to the in-season produce, Creole seasoning, the Serrano pepper (mine were very spicy but feel free to add more if your’s are not) and of course the andouille, one of my favorite kinds of sausage. I used turkey andouille so it was a little lighter but regular would probably be even better! It’s a great meal for a hot summer night.