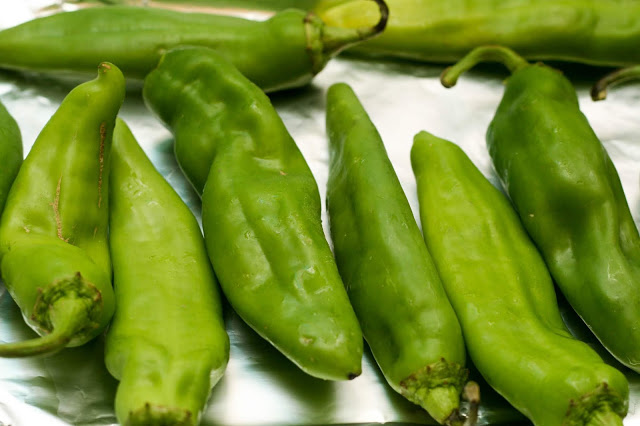 I’m sure you’re tired of hearing how rainy it has been this summer but its true (according to the Washington Post, we’ve had 300% more rain this summer than average) and it has really affected my cooking and recipe development.

In years’ past, we’ve gone to chile roasting events and picked up several pounds of Hatch Green Chiles during their short season. This year some of the events were canceled due to rain but I have suddenly been able to find raw Hatch Chiles here in Baltimore in a few stores for the first time. The logical conclusion was to roast them on the grill myself (the tumbling roasters are best but one can make do) but again, rain!

Here’s my post on how to process the chiles if you are lucky enough to buy them at a chile roasting event.

I finally gave up on waiting for clear skies and roasted them in the oven. I do not think this is the best method nor the tastiest but it works just fine. I do not suggest roasting huge amounts of chiles (when we’d get them at a roasting event we’d get 25 lbs roast and process them at home and freeze) because even if you have fairly good ventilation, the room gets quite smoky and full of chile oil. I would recommend roasting no more than 2 pounds at once.

Line a baking sheet with foil, completely covering the entire sheet, including the edges. Turn the broiler on high.

Place the chiles in a single layer on the foil. Place in the oven roughly 3-4 inches from the broiler.

Broil for 10 minutes or until the chiles are charred. Use tongs to flip the chiles.

Return to broil for 2-3 minutes or until that side is charred and blistered. The second side cooks much faster than the first, do not leave them unattended! 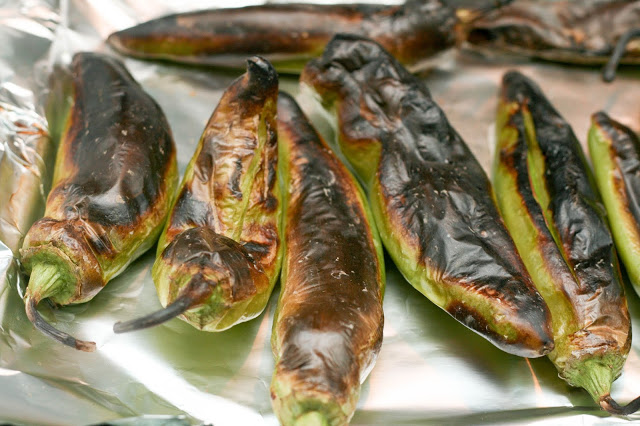 Using the tongs, place the chiles in a bowl (preferably something non-porous like metal or glass) and cover tightly with foil. Allow to steam until cool enough to handle.

Repeat the process for any remaining chiles.

Using food safety gloves, peel the blackened skin off each chile. Discard the skin. Squeeze out the chile seeds and discard.

Use immediately or process for freezing.


If you are freezing them whole, slide the pepper into the bag as flat as possible. Repeat for remaining peppers. Freeze in a single layer in the bag. Remove as much air from the bag as possible (sucking it out with a straw works nicely if you don’t have a vacuum sealer) and seal.

If you are freezing chopped peppers, flatten the diced chiles in the bag. Remove as much air from the bag as possible and seal.

Freeze flat in the freezer.

Defrost overnight in the refrigerator as needed for recipes.