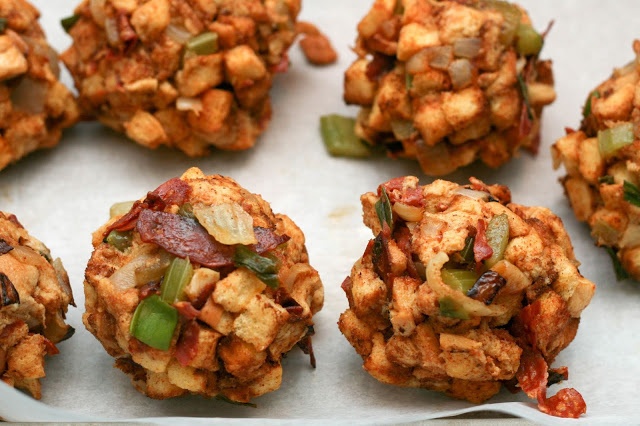 Preheat oven to 350. Line a baking sheet with parchment.

Saute the onions and celery in a skillet until the onion is translucent and soft but not browned, about 10 minutes. Then, in a large bowl, mix together the remaining stuffing ingredients until well combined. Form into stuffing balls. Arrange on the parchment paper. Bake 30 minutes. 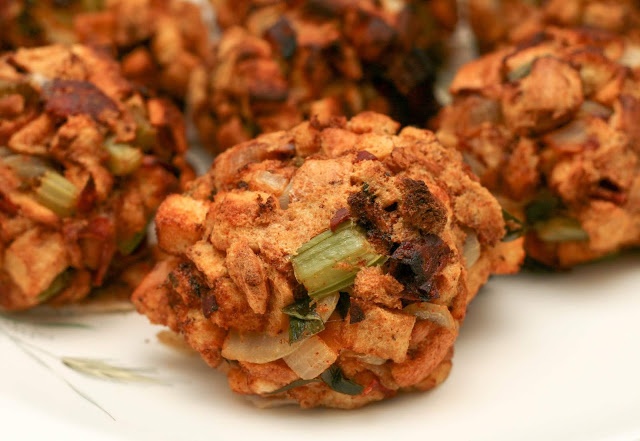 *I bought this in the bread aisle, near dinner rolls. Normally I just make my own but it was the same price as a loaf of bread and a lot quicker.

Growing up, we always made stuffing balls vs stuffing the turkey or making dressing in a pan. We would arrange the balls around the turkey in the roasting pan so they’d get some juices from the turkey on them without the risk of salmonella. I still do this but mix of the ingredients. I’ve made a lot of stuffing balls over the years!

Recently I made a marinated boneless turkey breast but still wanted some stuffing so I made these on a baking sheet lined with parchment instead.**  Since they were not getting any juices or fat from roasting with a turkey, I used thin strips of Spanish chorizo to add and robust flavor, a bit of fat and a strong savory note. They ended up being a bit spicy and flavor-packed! Plus, I used pre-cubed bread so it only too about 10 minutes of prep then they cooked for 30 minutes totally hands off. Who says you can’t make stuffing on a weeknight?

The stuffing balls are soft on the inside and lightly crunchy on the outside which I love! It is like the best parts of stuffing or dressing but in a personal-sized package. Don’t be tempted to use hard, crouton-like bread cubes for this, the bread needs to be on the softer side in order to hold their shape.

**of course, you could still roast these with a turkey, just add them to the pan for the last half hour or so of baking.