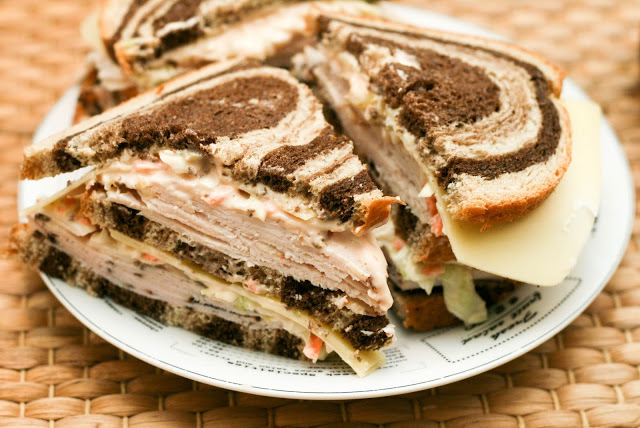 The night before you want to make the sandwiches:

Make the coleslaw: In a small bowl, whisk together the mayo, vinegar, and spices. In a large bowl, toss together slaw mix and carrot. Pour the dressing over the vegetables, toss to evenly distribute. Cover and refrigerate

When you want to make the sandwiches:

Squeeze out any extra liquid from the cole slaw. (This recipe makes a ton of slaw so feel free to only squeeze out half of it and use the rest in something else; we had it on hot dogs the night I made it) Set aside.

Butter one side of two slices of bread; set aside.

Top two slices of bread with an even layer of turkey pastrami. Evenly cover with coleslaw, then spoon on the dressing and smooth it out. Top with 1-2 slices Swiss to cover. Top each with a slice of bread. 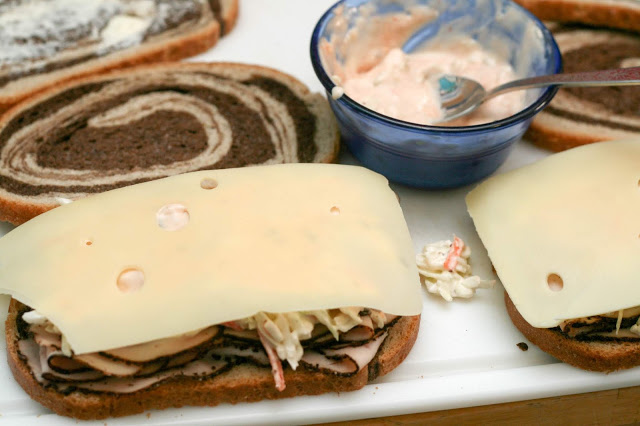 On the second layer, place an even layer of roasted turkey, then coleslaw, then dressing, then Swiss. Top with the buttered bread (butter side down). Cut a triangle shape out of the middle  (leaving two half-moon shaped ends) and serve. 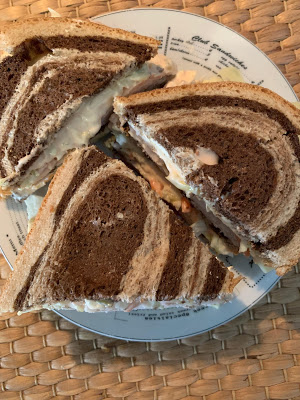 Yield: 2 sandwiches, can be doubled. You will probably have some dressing leftover. Use it to make a Cloak and Dagger or a Reuben along with the rest of your rye and Swiss. Or make the most of your leftovers and make a Rachel with turkey or pastrami, coleslaw, rye, and Russian dressing.

*If you are in Baltimore, somehow the turkey at Mastellone’s tastes better than the Boar’s Head turkey anywhere else. My secret theory is that it is from being stored in the deli case with all those yummy Italian meats but I have no scientific research to back this up.

**Traditionally this is made with a Pullman loaf of rye sliced horizontally into long slices. Good luck finding that. You can make your own but that’s a lot. Other delis sell it on regular sliced rye cut in the distinctive triangle middle, half-moon sides way I did here. I like marble rye best. Just use the middle slices so they are large if using bread from a round loaf.

I have always wanted to make a New Jersey style Sloppy Joe ever since I first saw one which, oddly was in a Shop Rite ad for party sandwiches. Now I do love the other kind of Sloppy Joe but this is no saucy, ground beef laden sandwich. This is it’s equally messy deli long lost cousin. The origin is a bit murky (the same bar, Sloppy Joe’s, may have inspired both sandwiches?) and outlined a bit here in this article but unlike with superheros, its origin story doesn’t really matter.

Originally made with tongue (which can be tricky to find and I was unable to figure out if it was fresh tongue or corned) most versions use corned beef or pastrami and roasted turkey. To make it a little lighter, I used turkey pastrami but feel free to use the real thing. I thought the turkey pastrami worked really well here because there are so many other flavors going on. I made the coleslaw and dressing from scratch but took a few shortcuts–I used dill pickle relish instead of chopping up pickles and used bagged coleslaw mix instead of chopping up the vegetables myself–to speed up the process. I find that it is really important flavorwise to make your own dressing and coleslaw for the best flavor but it doesn’t need to take all day.

The end result is a super tasty, not quite as messy as expected thanks to careful assembly, sandwich. Super flavorful and a lot more fun to eat than a basic deli sandwich. The coleslaw adds some crunch, the dressing somehow helps hold it all together and it just really melds together with the rye and the meat. A little more work than the average sandwich but not difficult at all. 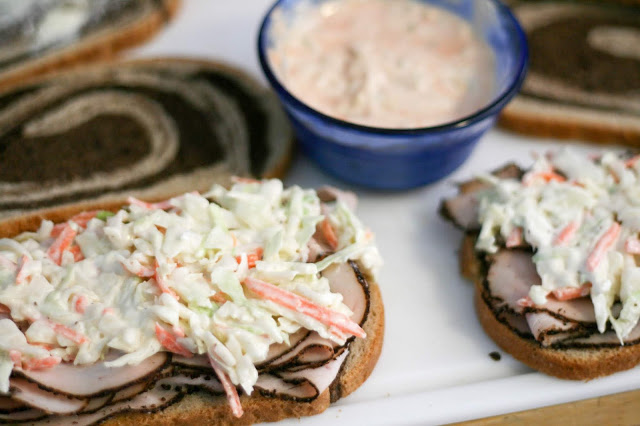