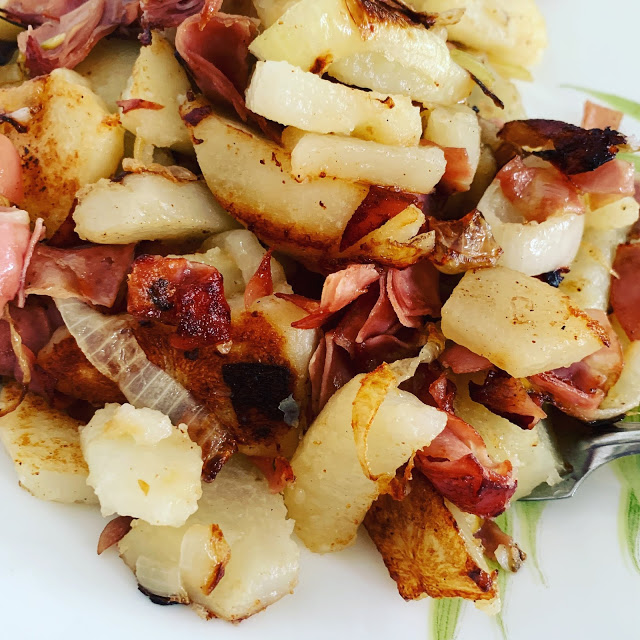 Parboil the potato in a medium pot. Drain and set aside.

Heat a large skillet. Melt the butter. Add the onions and mortadella and sauté until the onions are softened and starting to brown around the edges. Add the potatoes. Arrange the potatoes in as flat of a layer as possible. Cook until golden then flip and brown the other side. Sprinkle with salt and pepper and serve immediately.

I have always been a home fries person. My grandpop always made them for me growing up (often alongside his meat cakes) and I think they are so much better than hash browns. Unfortunately,  a lot of restaurants don’t seem to know the difference between hash browns and home fries so when I order home fries, I am often very disappointed.

I make them at home not terribly frequently but every time I do I wonder why it has been so long! Normally I make them with bacon but we had bought way too much mortadella shortly before our trip to NYC last week so I thought I’d swap some for the usual bacon. I’m so glad I did! The mortadella (the fancier, Italian cousin to bologna) crisped up around the edges and added a ton of flavor to the potatoes. It was a revelation. I think I might buy “too much” mortadella on purpose next time.

The trick to good home fries is to parboil the potatoes. I don’t always do it, my grandpop never did, but it really is the easiest way to guarantee crispy, perfectly cooked potatoes.