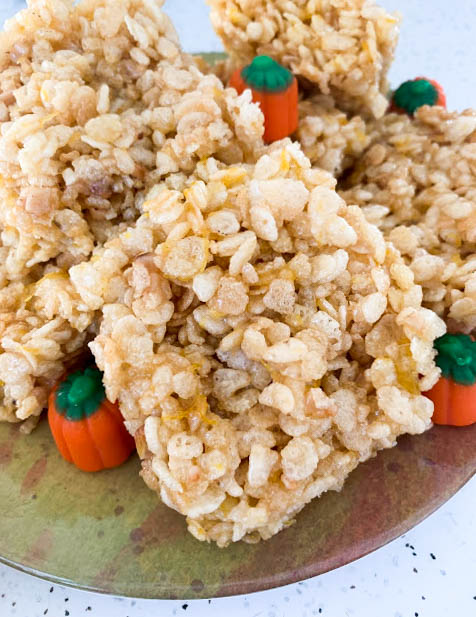 In a large bowl, toss together the cereal and toffee. Set aside.

In a large, heavy-bottomed pan, melt the butter. Whisk together the pumpkin, butter, and vanilla until the butter is melted. Add the marshmallows. 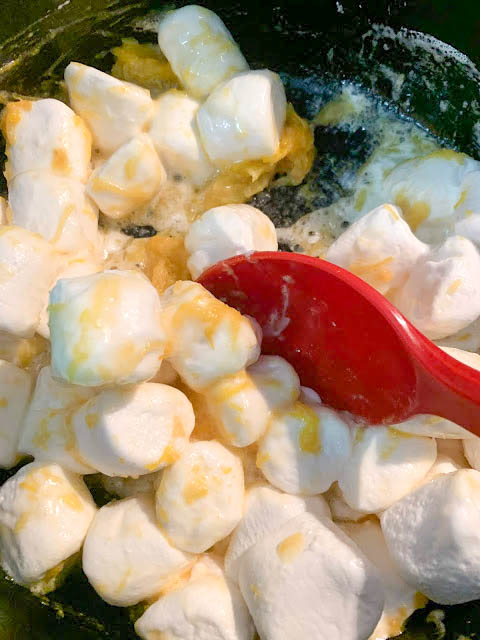 Stir until they are fully melted. Turn the heat to the lowest setting. Stir in the cereal mixture. Immediately scrape into the prepared baking dish. Very gently, smooth it out so it is an even layer without pressing down and compressing the mixture. Allow to cool at room temperature until firm enough to cut into squares. Turn out the dish and cut into squares. Store at room temperature in a foil-wrapped container.

*I roasted a sugar pumpkin for about 40 minutes at 350 and scraped out the flesh.

My goal this year was to use up every last scrap of flesh from those volunteer pumpkins. So far, I’d only made savory dishes but I felt like I needed one sweet treat. For some reason, I always think of making Rice Krispies Treats in the fall. Not sure why that is; summer would make more sense since they don’t require heat or effort.

I thought why not add some pumpkin to the mix? I had so much pre-roasted pumpkin I could spare some to experiment with, I had store brand “crisped rice cereal” ($1.99 for the giant box) and Aldi marshmallows (89¢), and half a bag of toffee leftover from making cookies,  so at the very most I’d be out about $2.

The result? Surprisingly pumpkin-y treats! The toffee blended into the pumpkin to give it a rich caramelized flavor. Who knew? I will say they are slightly less crunchy than traditional Rice Krispies Treats due to the extra moisture from the pumpkin but the texture was still pretty close to the classic. I would follow my instructions and wrap them in foil vs the usual air-tight container I’d typically store them in so the moisture doesn’t build up in the container overnight and make them soggy. I just covered the Pyrex I made them in in foil and they were perfect the next day.