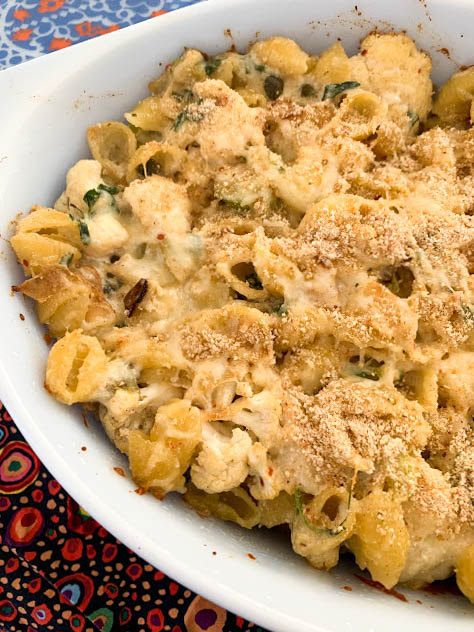 Preheat oven to 400. Grease a large casserole dish (I used my Pyrex New Holland 2 1/2-quart casserole and it was just a tiny bit too big, a 2-quart dish might be just right). Set aside.

Bring a pot of salted water to boil. Cook pasta until barely al dente. Drain and set aside.

Meanwhile, saute the onion and garlic in butter or olive oil until the onion is translucent. Add the cauliflower, celery, capers, and spices saute until the cauliflower is nearly tender. Reduce heat to low and stir in the drained pasta, ricotta, parsley, and shredded cheese. Stir until all ingredients are evenly distributed. Pour into prepared pan. Sprinkle with breadcrumbs.

Bake 20 minutes or until browned and bubbly. Serve immediately.

Someone mentioned Trader Joe’s selling a frozen cauliflower shell pasta casserole “Cauliflower & Cheesy Pasta Shells” that they liked but it kept selling out before they could get their hands on it. I googled and found a picture that showed the ingredients and thought I could pretty easily make that at home from scratch and use up ingredients I had on hand for recipes I had planned for those dark days after my husband melted our oven controls. I had ricotta for an eggplant dish that never materialized, Italian blend cheese for the same dish, half a box of pasta I had earmarked for the shrimp salad I never made and some random cauliflower all taking up space in my fridge. I took some liberties and added celery and parsley for some color (and to use them up!) and capers because I love capers with a fervent passion.

I did not grow up in a casserole eating family (unless you count mac and cheese) and have never had a casserole anyone but I have made (unless you count crab dip) so I’m always a little nervous how they will turn out (am I missing some crucial step or ingredient?) but I really enjoyed this one! It was flavorful and hearty and I think would be welcome at any table. It has an Italian bent to it, but I think it would even work alongside traditional Thanksgiving dishes next week. You could even make it the night before and just pop it in the oven while the turkey rests before carving, just take care to let it come closer to room temperature before baking to speed up the cooking time and to avoid the dish cracking due to thermal shock.