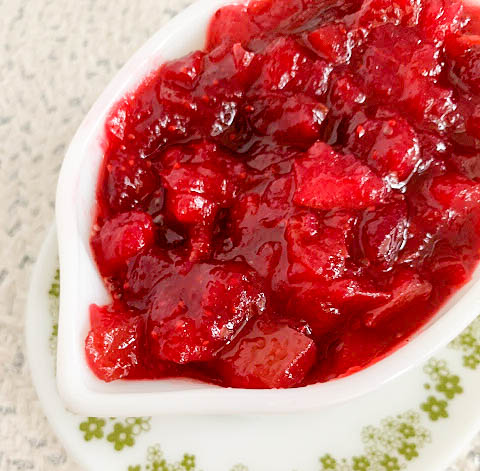 Directions:
Place the cranberries, apple cider, sugar, and cinnamon sticks in a medium saucepan and, stirring occasionally, cook for 20 minutes over medium-high heat to reduce and thicken. Remove the cinnamon stick and serve.

Not to be confused with cranapple sauce which would be applesauce (ick) spiked with cranberries, this a cranberry sauce with just a hint of apple. We actually used an apple we picked way back in October–our poorly insulated enclosed porch comes in handy in these situations–and some unfiltered (soft) apple cider I picked up at Trader Joe’s. It’s on the sweet side so we used a little than a cup of sugar so start with a scant cup and work your way up as needed to cut the tartness. It’s a very satisfying whole berry cranberry sauce yet super simple. We served it with a sort of meat pie we made with a layer of chicken, mushrooms, celery and onions with a light gravy, topped with stiff mashed potatoes then a layer of stuffing made from an old loaf of bread from our local Italian store, mushrooms, onions, and celery but you can serve it alongside anything.

I used the leftovers to make this cranberry sauce crumb cake.