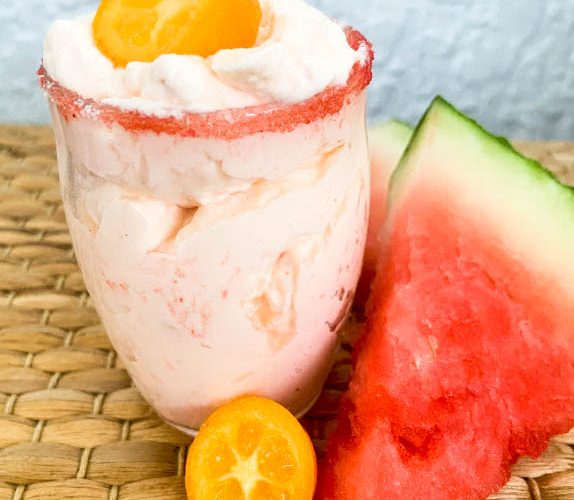 A local restaurant we’ve dined at many times has been keeping afloat with takeout and boxed lunches and once a week offering a box of various ingredients for $50 for a sort of “Chopped, Quarantine Edition” challenge. This past week it included soft crabs so I signed up. Matt picked up the box and in it was 2 small soft crabs, 4 shrimp, chicken thighs, Kool-aid(!), 2 ears of corn, 4 baby red skin, potatoes, cream, 4 eggs, a watermelon slice, butter, wine, 2 kumquats and a tiny bit of shredded cheese. We were allowed to add spices and minimal other ingredients (like cooking oil–I also used sugar and flour in my recipes) but mostly only use the ingredients in the box. This was the dessert I came up with. 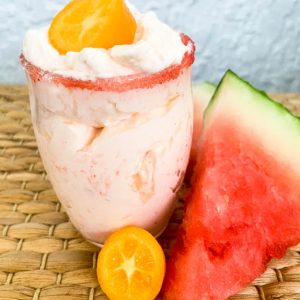 I really couldn’t think of anything to do with the Kool-Aid or as a dessert when I thought of making posset but didn’t think it would work. The lack of any real citrus really was working against me in this box. Then I remembered posset’s old friend, syllabub. Syllabub is a dessert (its origins were a very similar drink of curdled cream and lemon juice with the same name) that had it’s heyday during the 16th to 19th centuries and is rarely seen today.

It’s traditionally made with sweet wine or sherry and berries or citrus but why not watermelon and pinot? Why not indeed. It was worth a try! As it turns out, it was actually very very good. Rather rich (yet deceptively light tasting) since you are basically eating boozy cream but very tasty and I’d totally make syllabub again.

The watermelon flavor came across wonderfully! At first, I was going to juice it but then I just tossed a chunk in (I have reached the “why not?” stage of quarantine) and it totally worked. The fruit got pulverized as the cream got whipped and tiny bits of watermelon flesh was nicely distributed throughout.
As it turned out, I won the second prize but seriously, I was a winner because this was a delicious meal!
My entry below (not pictured, lemon-pepper corn and chicken fritters)