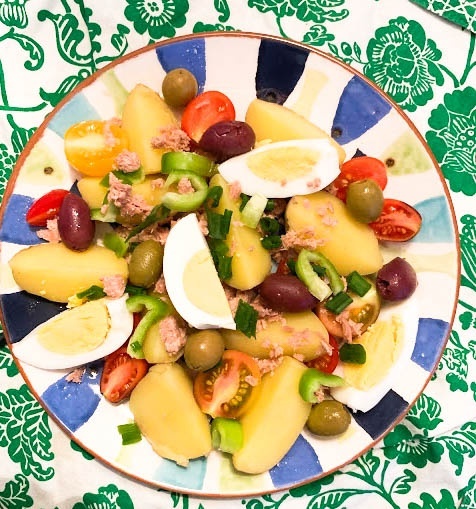 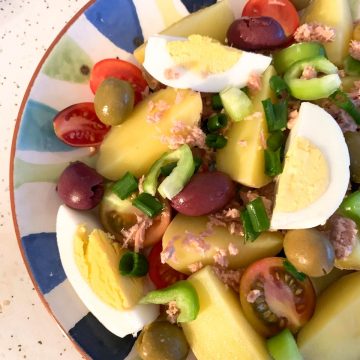 Last winter and spring, which seems like a different time now, back before my mother was diagnosed with aggressive brain cancer and the current pandemic, I was working on a pitch for a new cookbook about tinned seafood. Unfortunately, the pitch hasn’t been sold yet and I was told there was a little interest in an American book about cooking with canned fish. Of course, that was back before everyone started hoarding tuna and perhaps pantry cooking is looking a little more attractive right now. I’d love so much to write that cookbook!

Part of what went into writing the proposal (for me, I don’t know how other people do this) was researching how people around the world consume tinned seafood. When we were in Portugal far too long ago, we went to two different restaurants where tinned fish was the star of the menu. We ate it both straight from the can and turned into all sorts of fun croquettes, salad, and appetizers. I talked about it in this recipe for Portugal’s version of this salad and it really sparked an interest in exploring preserved seafood in me. Despite being a coastal country, a large portion of the seafood that was on menus was either tinned or salt cod and it was all delicious. I thought there would be interest in an American book about tinned seafood because even before the pandemic the sales of it had increased around 25% in the last few years and every grocery store I go into has a huge assortment of it from many different countries and style. Even now when people are looking for recipes to use up all that tuna they panic bought back in March, outlets like the New York Times are still posting recipes for American-style tuna salad in their weekly food round-ups (this week!) and pushing casseroles. I love tuna salad and I’ve never had tuna casserole (but I’m sure it’s tasty too) but there is no reason we are limiting ourselves like that!

There is a lot more you can do with tuna! Tuna in the US tends to be dry packed (in foil packets) or packed in water so it’s important to add some oily ingredients for optimum flavor. The simple vinegarette in this dressing does it for you. If you have oil-packed tuna and are using that, you can drain it for the salad and use that oil for the dressing instead of olive oil if you’d like. This salad is similar to the Portuguese salad I had come across and made awhile back. I’ve read many articles about this salad in Spanish about how it was a childhood favorite or how it was so good on a hot day for lunch or a picnic. The ingredients are very simple so make sure you use good potatoes (Yukon gold are tasty and hold their shape well) and nice olives for best results. I made this last year before tomatoes came in season while working on my proposal and saved it. It really is so simple yet so delicious! It’s still slightly early for good tomatoes but cherry tomatoes are consistently good and work well here. If you have some homegrown or farmers market tomatoes, use that! If you have jarred Spanish or Italian tuna filets packed in oil, that is what is more traditionally used in this salad (so feel free to use that instead) but much more difficult to find, and pricy than what I call for here.