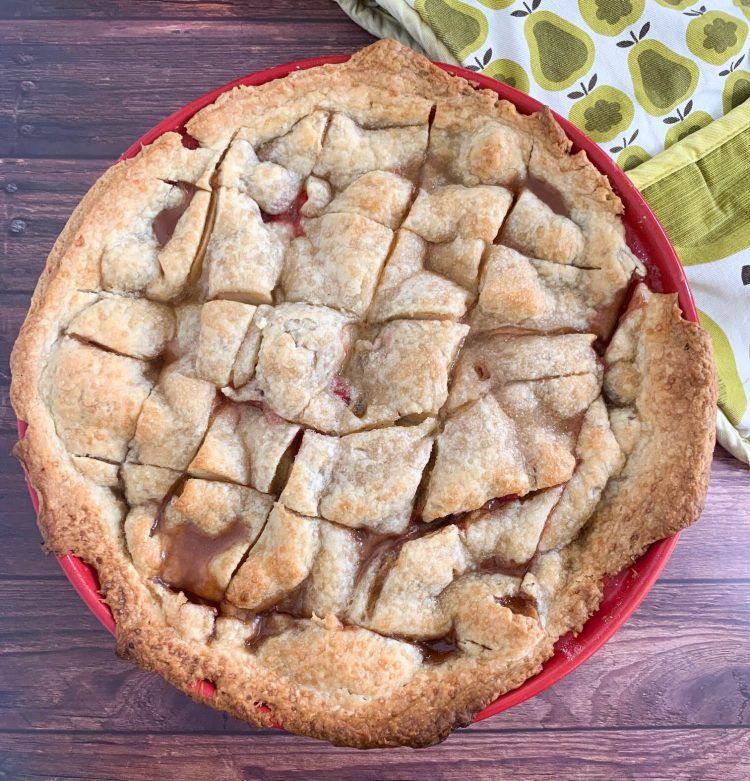 My crust started to brown around the edges at about 40 minutes in (20 minutes into its second trip into the oven) so I put on this pie shield. Keep an eye on it and use a shield or some foil to protect the edges while the middle is still cooking.
Keyword dessert, pandowdy, pie

Have you made a pandowdy before? It’s like pie’s easier cousin and it’s supposed to be rustic so it’s perfect for these exhausting times. If you haven’t pandowdied, now is the time and this is the recipe to make.

Pandowdy seems shrouded in mystery to me. No one really knows why they are called pandowdy* (is it their “dowdy” appearance? Some sources I found say yes, some say no.). There are more variations than you’d think for such a simple dessert. It’s almost always apples and apples alone but then the differences come in. Some sources claim it was a way to use up old bread, some sources say it was always made with pie dough. Really old recipes call for molasses the only sweetner but then some nearly equally  ancient recipes call for brown sugar. Most recipes call for only a top crust but I’ve seen a few double crusters out there. I’ve also seen recipes that call for making puff pastry or rough puff to put on top. No thank you. I really think this is a rustic dish that was probably created to use up leftover scraps of pastry from (savory?) pie making and what was on hand during the winter, namely apples (which can be kept for months in a cool place–I picked these myself back in October) for a quick dessert.  A simpler, lightly sweetened pie dough made the most sense to me.

I’ve also seen some recipes that call for you to make dozens of little squares and put them individually on the top of the apples. No. I am not doing that. I’ve read more than my share of historical American cookbooks and I’d say in at least 95% of them it was a single crust and you put the crust on the top, baked it for a bit, slashed it up, and returned it to the oven. It is not only the easiest method (thankfully for all involved) but it is the tastiest in my esteemed opinion. It’s crispy yet juicy at the same time in every single bite. Don’t tell anyone but I think I liked this more than any pie I’ve had or made in years.

Because I can’t leave well enough alone I did stray from the very plain apple-cinnamon road that was before me. I left out the cinnamon altogether in favor of spices I like more; namely mace, allspice, ginger, and cardamon. I actually put in slightly more than I called for above in each so feel free to throw caution to the wind and do the same. I seasoned the pie crust with mace to add even more depth of flavor and tossed in some cranberries for that burst of tartness I think every fruit dessert needs. Instead of coating the whole filling in melted butter, I tossed in cubed cold for reasons of deliciousness. The result was, if I may say so myself and clearly I do, stupendous. We may or may not have eaten half the pandowdy the first night. Now I am left wondering what can I dowdy next?

*My idle speculation is that pan something or another was a popular term to mean a one-dish meal made with scraps from other dishes like pan haggerty which is a similarly sloppy looking potato dish.