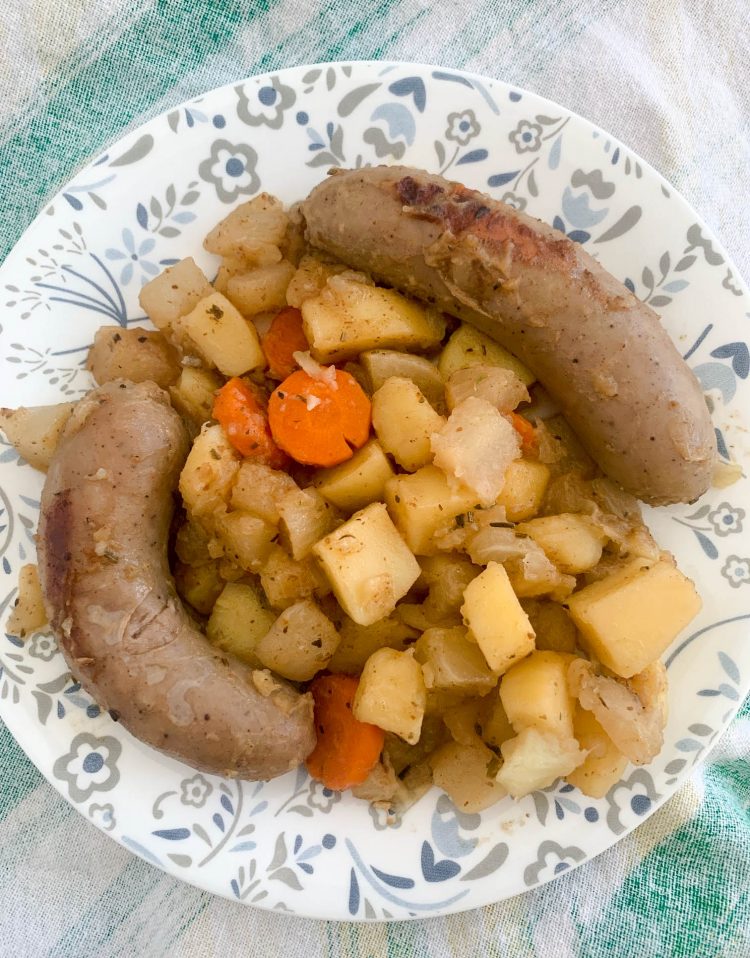 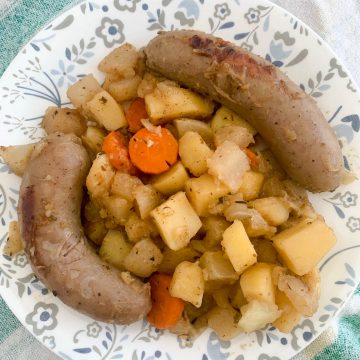 Based on the classic stew-like Irish (or Dublin) Coddle, this dish transforms it into a speedier, one-skillet meal but keeps all of the flavors intact.
Print Recipe Pin Recipe
Servings 4

Let’s get it out of the way and say this is a very ugly and frankly, slightly suggestive dish (you should see the pictures I didn’t use!). It is, however, a very tasty and satisfying dish.

The last few years I’ve made coddle (aka Irish coddle, Dublin coddle) with some of the sausages I can only find at Aldi or Costco and for only a couple weeks a year. It’s sort of a homey stew- it can have barley but I’ve always made it without–made up of sausages and root vegetables. I love sausages and root vegetables and I always feel like I like should love coddle but I never do. It takes a while to make (about 2 hours at least in the oven and I’ve seen recipes that call for you to make it all day) and always seems a little blah. I like a stew in general and love recipes that easily incorporate leftovers and odds and ends but coddle, despite the cute name which is why I think I kept making it again and again, didn’t hit the spot.

This year during one of my now rare trips to the store was time perfectly for “Irish banger” week at Aldi so I stocked up to think I’d make turnip-spiked bangers and mash and maybe give coddle another go. I couldn’t really get enthused about coddle though (don’t come for me, coddle lovers) and was thinking of what else I could do with all these sausages. I thought about those times when I cooked potatoes in really flavorful liquid (lemon potatoes, bacon braised among others) and how good that was and knew what I had to do. I cooked the vegetables quickly in a seasoned broth and then added the sausages to lightly brown them and the veg after the broth boiled off.

It was exactly how I hoped coddle would be, warm and cozy but with more of a caramelized flavor on the sausages and onions. Added bonus: it only took about 30 minutes.