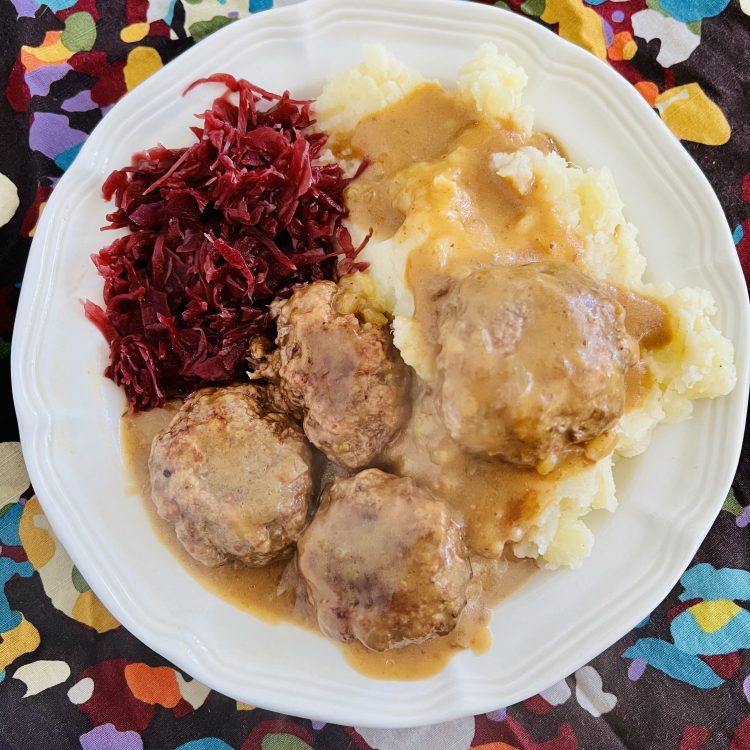 For the meat cakes--

To make the brown sauce (gravy):

Almost all the Norweigan sites recommended collecting the scraps of cheese that are too small to grate in a bag until you have enough to make gravy. This recipe makes a lot! Free free to halve it. "Meatloaf mix" (a combo of ground veal, beef, and pork) is also very good in this instead of a half pork/half beef mixture.
Keyword meatballs

I came across people making these meatballs/meat cakes at Christmas time and one person mentioned leaving the cheese out of the sauce this year and I instantly knew what cheese it must be! I had some on hand just waiting to be used. It’s sold under the name Ski Queen here and is pretty easily found. Whole Foods normally carries it as do a lot of cheese shops. It comes in a very solid, small 8 oz cube. It’s called gjetost (or brunost or mysost) and is a goat cheese that is almost fudge-like in texture. It has a nutty almost candied yet not too sweet taste to it thanks to the manufacturing process which includes boiling whey, milk, and cream down over many hours until it caramelizes. It makes for a very distinctive cheese.    I’ve largely seen it served alongside heart-shaped waffles (similar to these) but can also be melted into “brown sauce”, the thick gravy you find served with Norweigan meat cakes (which remind me of frikadellen, different spices, same flat meatball appearance). I read a lot of Norweigan blogs and food magazines looking for insight into the recipe and they almost all gave the tip of freezing up the ends of your cubes of cheese and collecting them to use in this sauce. A great idea if you are chowing down on a lot of gjetost throughout the year. For the rest of us, the cheese is pretty affordable (I paid about $6 for the cube) and tasty even on its own–you’ll have some leftover. I actually ended up doing the reverse of the suggestions and opening a new cube for this recipe and freezing the rest to make this again. My husband LOVED these so much. He said he thinks they are the best of all the meatballs I’ve ever made.

I made these at lunchtime to get all the cooking out of the way for the day but this makes a great dinner or party food. About half the recipes had you pan fry and then complete cooking the meatballs in the gravy and the other half had you bake the meatballs and add them to the gravy at the end. I found doing what I did here–start them in the pan then finish them in the oven before adding them to the gravy was the best of both worlds. No worry that they weren’t fully cooked (a concern when cooking with ground pork) but they still added flavor to the sauce. The sauce/gravy is intensely savory–I don’t know if I would guess that it had cheese in it but it adds an earthy note that is perfection. My husband had it with the last of our jar of lingonberry jam but I thought it was fine with just some pickled red cabbage for contrast.