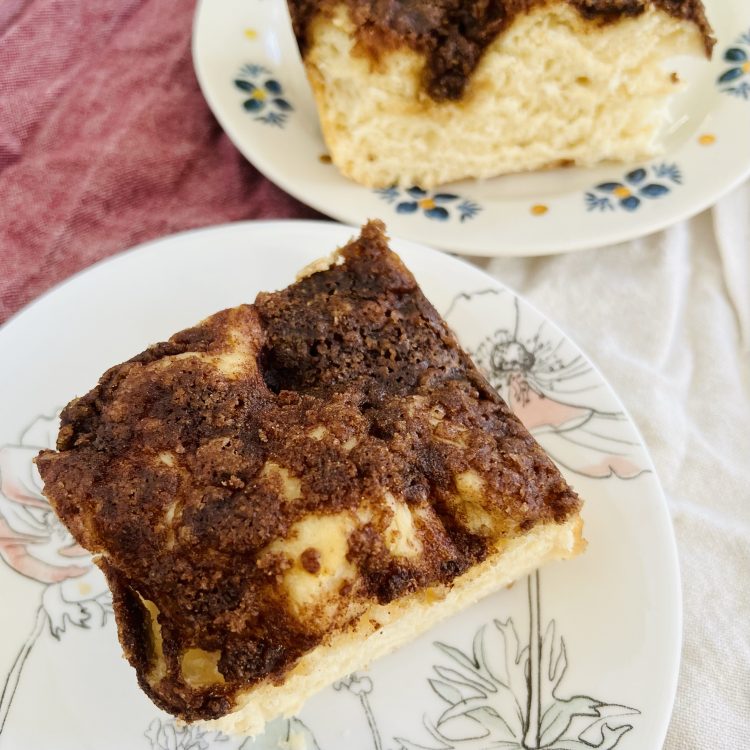 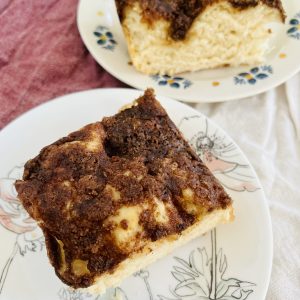 If your house is cold, you might need to allow this to rise longer than 45 minutes! I find using a ricer for the potatoes makes the best texture. I actually got mine at Aldi but it is very similar to this one.
Keyword cake

You know I can’t resist a regional recipe. Apparently, this cake is very popular in Winston-Salem, NC but I first came across it in Lititz, PA where we go to pick up the pretzels we like. There is a food hall next to a little park and we got to talking to an older couple there (this was in the before times) and they said they drive up to get it every year. To be honest, I don’t really like any of the food in that food hall but I tucked that little nugget away. When I did my research I found that it is a cake that is popular with Czech immigrants who were members of the Moravian church who had mostly settled around the Piedmont area of North Carolina and then near Bethlehem, PA. I’ve never been to either of these areas but I know you can find it in Lititz which still has a Moravian church congregation and even a little gift shop selling Moravian items like the famous star ornaments.

There doesn’t seem to be a huge amount of info about why the immigrants came up with this particular cake as it doesn’t exactly match up with any cakes from the Czech areas they had left. If I had to guess, I bet they used potatoes to feed their starter for bread and then decided to make a cake using the same starter but enriched with milk and butter. Make do with what you have, right?

Some recipes I found called for making multiple smaller cakes or used instant potato flakes but I found I got the best, fluffiest results from using a real potato and a 9×13 inch pan. It really is an easy, forgiving dough. It is a bit sticky but you aren’t handling it much–just make sure that the dough is able to easily pull away from the bottom of the mixing bowl before the first rise. We used very dark cinnamon and ended up with a dark-looking cake–if you are using a lighter variety your cake might look a little paler. The cake when it comes out is very soft and has a pale bottom crust but it should be perfect at 20 minutes. Resist poking at it.

Really, if you have ever made focaccia bread, you will ace this. The method is very similar and at the end, instead of savory bread, you get a lightly sweet, fluffy cinnamon and butter-drenched cake. I’ve heard it is best served warm but room temperature works too. Since it is a yeast-based cake I do think it is best the day it’s made and the day after. After that, it starts to dry out. Slices make a nice alternative to cookies if you are gifting  your neighbors!