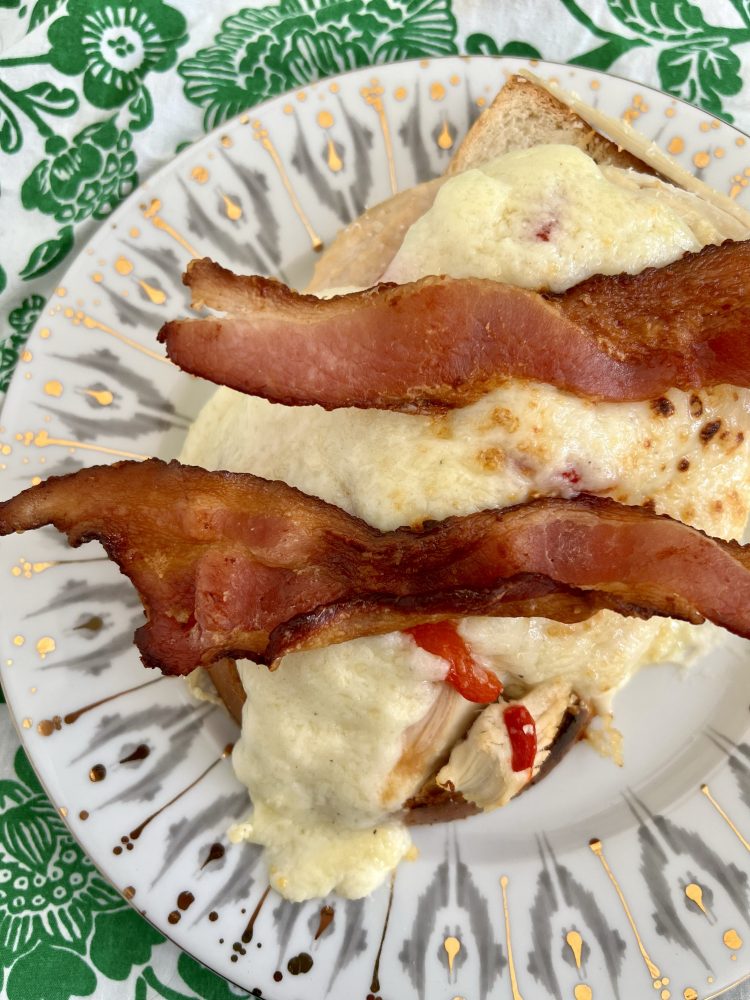 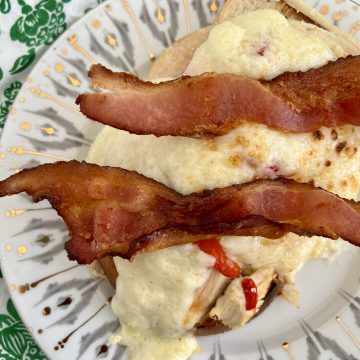 There are a few recipes I’ve thought about for years and never actually made. Kentucky Hot Browns are one of them. I had researched it for our decade themed NYE nights for the 1920s but never actually made it. I think about it every year after we make a turkey. I really have no good reason not to have made it. Maybe back then I was more leery of whipping up a cheese sauce for some sandwiches? It sounds tricky but Mornay sauce is really the base of homemade macaroni and cheese and many other creamy cheese based dishes and I’ve made enough of them over the years that it’s really not a big deal. Sometimes recipes just slip through the cracks.

It really was a leftover recipe from the very beginning. Like so many other dishes, like nachos and the Cobb salad, it was made when rich people demanded something interesting to eat late at night and the chef had to come up with something with what they had on hand. I really couldn’t find an exact date when the first one was made just that it was 1926 at the Brown Hotel in Louisville, Kentucky but I am sure it was fall or winter because really not too unlike today, whole roasted turkey breast was really something you only had around the holidays. It’s sort of divided on if the inspiration was the Welsh rarebit (open faced melted cheese sandwich) was the inspiration or not. That seems to be the most popular theory but I sort of agree with those of the less popular opinion that it was based on the croque-monsieur which has ham and Gruyère on it and was invented in the early 1900s. I feel like French food would have been popular with this crowd and a chef would have known of it. A Welsh rarebit is tasty but humble* dish and normally doesn’t have any meat. Although now that I think about it I did have “Le Welsh” in Lille, France that was based on the Welsh rarebit and had ham, mustard, a beery cheese sauce and an egg. Anyway, that is not important.

There is some debate about what was in the original Hot Brown (I even read a whole Hot Brown book today!) and a lot of recipes now call for tomatoes and ham but I don’t know if I think a tomato would have played a prominent role in a sandwich in the winter of 1926, it would be so far out of season. I think it was more likely, as theorized that there was some pimento on the sandwich because pimentos were shelf stable and a very popular garnish or “spot of color” in the beige dishes of the era. I am sure he would have some on hand. Early stories don’t mention ham either. This is my blog so I’m keeping with my NYE rules and going with what I think is the most original. I don’t want to eat a sliced tomato even in this unseasonably warm November but a jarred pimento is good forever. I did not toast the bread because that sounds miserable, use good quality bread that can hold up to being in an open faced sandwich and it will get a little toasty around the ends when you broil it.

I enjoyed the sandwich. It was a bit of effort, I made the bacon first and then everything else so it took about 20-25 minutes which is a lot of time for a sandwich but it was all very simple. I liked the pimento on it. If I wasn’t concerned about accuracy, I think I might whisk a wee bit of dry mustard into the sauce or spread thin layer of Dijon (or if you are a sweet lover, lingonberry jam or leftover cranberry sauce) for some extra flavor but my cheese wasn’t as robustly tasting as I had hoped. I could not find a strong Gruyère which would have been perfect and what I used mellowed the sharp cheddar and expensive Parm I used a little too much. You may not have that issue.

*An aside: A funny story my Grandpop told was of him being in England as a  military police officer in WWII. He took a local woman out on a date and the woman ordered a Welsh rarebit. He had no idea what it was and little money so he went to the bathroom looking for a window big enough to climb out of. There was no window so he returned to his date and was relived when the very cheap Welsh rarebit arrived and he realized it was basically a grilled cheese and not as fancy as he thought the name implied.