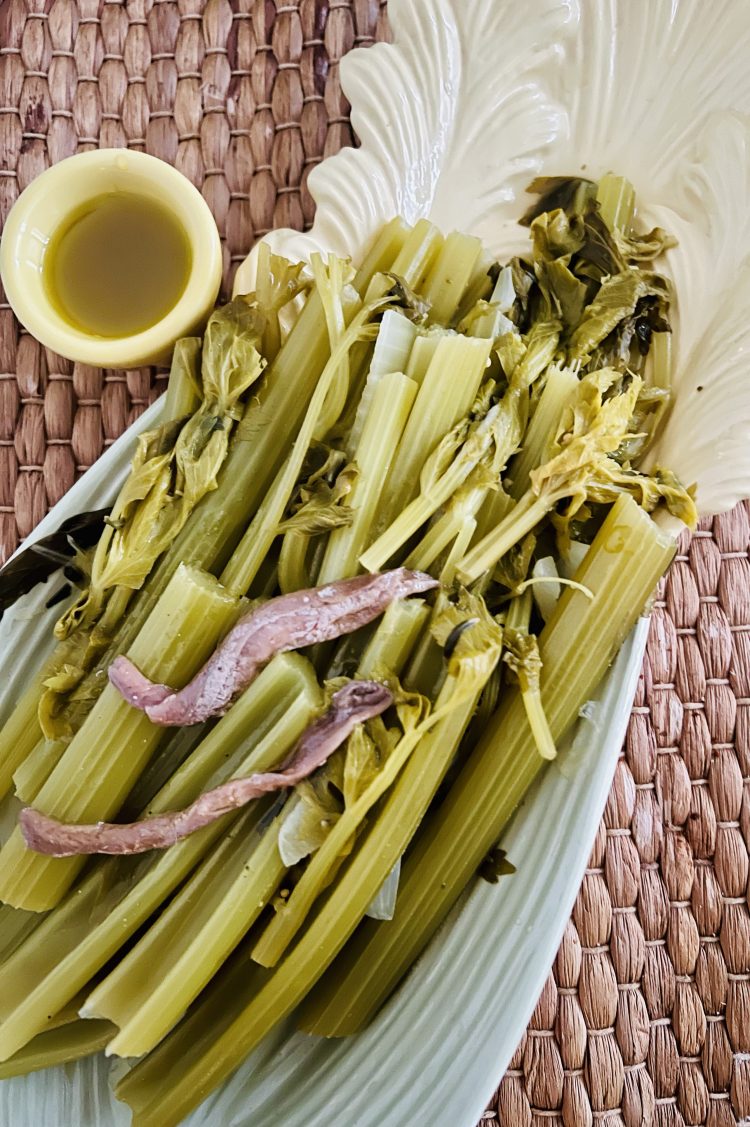 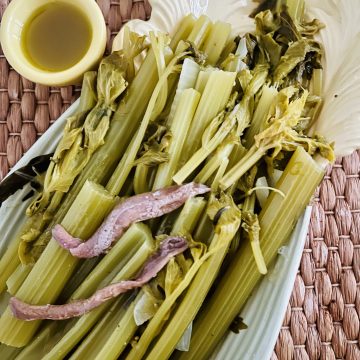 I have been looking for an excuse to make Celery Victor for years. I love celery and knew that historically, it had been quite popular and stylish before (this is a bit of a guess) the 1960s diet mania took over and relegated it to a diet “negative calorie” vegetable. Apparently at one point celery was the third most common item appearing on recipe menus after tea and coffee! Menus years ago often didn’t have the detail we have come to expect and something as apparently ubiquitous as celery probably wasn’t seen as needing much explanation. I saw “iced celery” and “icy celery” on menus and of course a lot of references to Celery Victor, especially on the West Coast. That makes sense since it has been accepted that it was created in 1910 by Victor Hirtzler, head chef at San Francisco’s St. Francis Hotel.

This year for our annual New Year’s Eve festivities we were watching movies with people’s names in the title and food named after people. Finally, my chance to make Celery Victor! We had done decade movie nights for years but never the 1910s for obvious reasons so I never reached this dish. We served it with Beef Stroganoff.

I found really early references to the recipe in newspapers where the gist was “make this restaurant staple at home” as far back as 1911.  Oddly no one claimed to be publishing an  “official” recipe and there was a fair amount of variation. A lot of recipes had you blanch the celery in lemon water and then boiling in a broth which seemed redundant to me. I wondered if it was a holdover from it being a restaurant recipe where perhaps the restaurant was blanching all the celery it served and reserving some for Victor to be cooked again. Most had you cooling the celery in the broth on the stovetop and some had you refrigerating it in the vat of broth for hours. Some had you marinate it in the dressing but I felt like the oil might congeal a bit and be unappetizing. The garnishes varied wildly from basically a salad of lettuce and tomato to hard-boiled eggs or pimentos. I ended up doing what I thought was best and really liked how it turned out. Hopefully, the original Victor would approve.