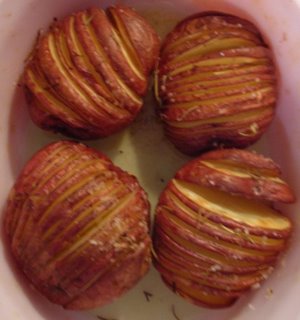 Preheat oven to 400. Spread half of the olive oil over the bottom of an oven-safe dish. With a sharp knife, slice each potato into approximately 1/8 inch slices WITHOUT cutting all the way through the potato*, leave about a 1/8-1/4 inch thick bit of intact potato along the bottom. Arrange on the dish, sliced side up. Brush with remaining oil and sprinkle with rosemary, pepper and salt. Bake 45-50 minutes or until cooked through and the sections are starting to separate. Remove from pan and serve.

*I have heard of placing the potato on the indent of a wooden spoon and then slicing until you hit wood but a steady hand works just as well.

Another easy, classic potato dish. I used red skin potatoes because that is what I had on hand but Yukon Gold or Russet would work just as well. You could add other spices to heat it up a bit but we were having a spicy main course so I went the simple route with the rosemary. I have heard of a variation of this dish called “hasselback potatoes” but I like “accordion potatoes” better-more descriptive and free of any reminders of David Hasselhoff. I also left the skins on which is a departure from the traditional Swedish recipe which calls for the skins to be completely removed.