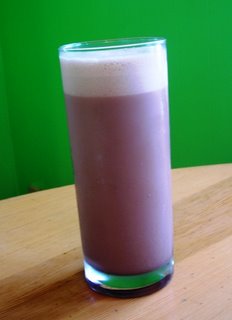 Pour syrup into a tall glass. Add milk. Stir to combine**. Tilt the glass slightly and carefully pour the seltzer down the side of the glass, to avoid losing the bubbles. Drink immediately.

*Fox’s U-bet syrup is traditional but I normally substitute the easier to find Hershey’s Special Dark syrup or even just regular Hershey’s Syrup. Purists, of course, sneer at anything less than Fox’s U-bet, some even waiting until Passover to get the “kosher for Passover” syrup made with the original cane sugar instead of corn syrup.

**I always stir the chocolate and the milk together first so I don’t have to stir the seltzer and lose the fizz. Some egg cream fanatics don’t stir until after all of the ingredients are in the glass.

Egg creams are one of those quintessential New York tastes that has a legion of devoted fans. It has long been a staple at delis around the city. According to popular legend, in 1890 Louis Auster, a Brooklyn candy shop owner, invented the drink which contains neither egg nor cream. The flavor is similar to that of an ice cream soda (not to be confused with an ice cream float, ice cream sodas are made with seltzer, ice cream and chocolate syrup) there are many theories floating about how the egg cream got its name but there is no definative answer. One such theory says the name came about to capitalize on other egg named soda fountain treats that were popular at the time (that actually used eggs), another popular theory suggests that it comes from various Yiddish phrases meaning anything from “good cream” to “pure sweetness” and a third states that it got the name from the fluffy white “head” which is reminiscent of whipped egg whites . One final theory is that the chocolate syrup was originally made with eggs. No matter how it got its name, it is a refreshing, chocolate-y drink that is perfect for a hot summer day.