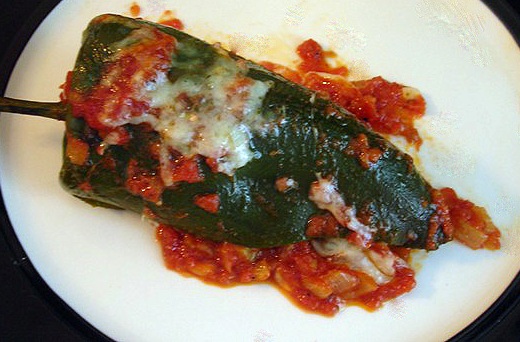 Ingredients:
4 large, fresh poblano (sometimes labeled as pasilla) peppers
4 cloves garlic, smashed
3 dried chipotle peppers
28 canned whole tomatoes in juice, pureed
2 medium sized onions
1/2 lb boneless, skinless chicken breast
1 medium zucchini, cubed
1 cup corn kernels
1 cup cooked spinach*
1 cup chicken stock
4 tablespoons olive oil
1 teaspoon cider vinegar
1 teaspoon ground cumin
1/2 teaspoon cinnamon
salt
pepper
juice from 1 lime
shredded cheddar cheese (for sprinkling)Directions:
In a medium saucepan, add the chicken breast, broth, garlic, lime juice, cumin, salt, ground pepper, one onion (quartered) and the dried chipolte peppers. Bring to a boil, reduce heat and simmer about 20 minutes or until the chicken is cooked through and is easily shredded with a fork. Remove the breast from the broth and set aside. Strain the broth, and puree the solids. Reserve the broth. Shred the chicken and mix it with the onion/pepper puree. Set aside. Meanwhile, in a large skillet, heat 3 tablespoon olive oil, add the remaining onion (diced) and cook until golden brown. Add the tomato puree, 1/4 cup reserved broth** salt, ground pepper and cinnamon. Cook until the sauce has reduced to form a thick sauce, about 20-25 minutes. In a medium saucepan, heat 1 tablespoon olive oil, add the zucchini and cook over high heat until the zucchini starts to brown. Add half of the tomato sauce, corn and reduce heat to medium. Cook an additional 15 minutes until thickened. Remove from heat, stir in the chicken mixture, spinach and salt to taste. Place the poblano chiles in a heat safe dish and broil 5 minutes on each side. Remove to a towel and allow to cool, five minutes. Gently use the towel to remove the skins from the chiles, using a circular motion. Preheat oven to 375. Cut a slit down one side of each chile (or in the middle, if a split formed while removing the skin) and remove the seeds with as spoon. Discard the seeds. In a shallow baking pan, spread 1/2 of the remaining sauce along the bottom. Place the chiles slit side up and carefully fill with the chicken mixture.Do not over fill, the chile should be able to “close” when filled. Repeat for each chile and reposition them so the slit side is directly on the bottom of the pan. Distribute the remaining sauce over the peppers and sprinkle with cheese. Bake for 15-20 minutes. Serve hot. 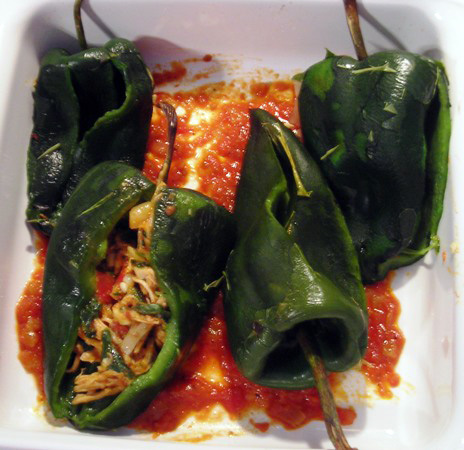 *if frozen, defrost and drain thoroughly.
**use any leftover broth instead of regular chicken broth in another recipe.

This is a colorful dish that is sort of a reinvention of the dish chile rellano (which literally means “stuffed chile” but generally refers to poblano peppers that have been stuffed with cheese and then deep fried) but is much healthier and in my opinion, tastes even better. Poblano peppers are on the mild side and surprisingly sturdy which makes them great candidates for stuffing despite their long and sort of pinched shape. Rather than just filling them with cheese, we combined chicken, zucchini, corn and spinach for a really fresh tasting and light filling. The poaching with the chile and onion adds great flavor the chicken, but if you were short on time, you could just shred leftover roasted or rotisserie chicken and use that instead. Rather than add the cheese to the filling, we sprinkled it on top for a little extra flavor. These were great for a meal, and any leftover filling you have makes yummy tacos or burritos.