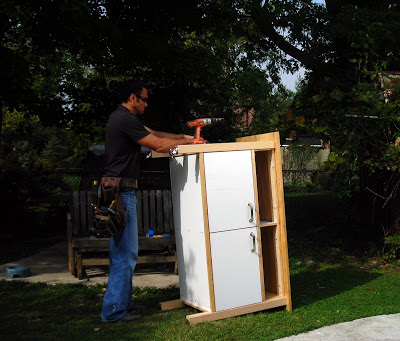 I thought I’d let you all in on a little secret. The reason I’ve been so busy the last few days is because I was filming a TV show! An episode of Andrew Dan Jumbo’s new(ish) show, Take Home Handyman to be exact. It’s not airing until late Winter, but we filmed these past three days and did a lot of work. Since I am a food writer/blogger they mainly concentrated on the kitchen, which was great-Matt learned a lot about home repairs- and since the final “reveal” of the kitchen was a surprise for me, I did some handy “man” tasks around the yard.

It really is a lot of work being on these shows-they didn’t leave last night until 3 AM! They film hours and hours of tape just whittle it down to a 22 minute episode, so I am looking forward to seeing what makes it into the final show. The kitchen looks great but they need to come back next week and put doors on some cabinets that some how got overlooked. All in all it was a great experience!

We are done filming though and while I can’t give many details about the final product, I can say I got some fun surprises that will help out with photographing food in the kitchen. I uploaded some pictures of the “before” and the work being done here.