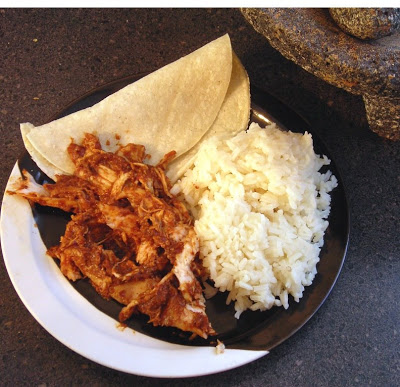 Directions:
Warning: You must start this recipe at least one hour before you plan to roast the turkey!

In a small bowl, whisk together the spices for the dry run so they are evenly distributed. Rub over the skin of the turkey. Allow to rest at least one hour in the refrigerator.

Next, roast the turkey at 325 for about 2 hours for a 6 lb half. Roast until the internal temperature is 170 in the meatiest part of the thigh.

Meanwhile, heat the oil in a small pan. Add the pepitas and cook until they start to pop. Set aside. Heat a dry pan, add the chiles and pan-roast until fragrant. Remove to a heat-safe bowl and submerge in hot water for 15 minutes then drain, reserving the liquid. Then, in a food processor, blend the the pepitas, chiles, onion, plantain, garlic, cloves, tomatoes, salt, pepper, oregano, cocoa and cinnamon stick until smooth. If the mixture is very thick, add about 1/4 cup of the reserved chile broth. Pour into a saucepan and heat through. Allow the turkey to sit 10 minutes once it has reached the proper temperature, then shred the meat. Pour the sauce over the turkey and toss to distribute the sauce. Serve hot with rice and (white) corn torillas.

*Homemade roasted tomatoes would be great too, but tomatoes aren’t in season yet.

Despite their links to winter holidays, most stores sell turkeys, turkey breasts or in this case a turkey cut in half lengthwise year-round. While mole in restaurants seems to be paired mostly with chicken, traditionally it is made with turkey. Half turkeys are perfect for a more everyday meal and don’t yield an overwhelming amount of leftovers. I like to roast them at a slightly lower temperature than I would the whole bird to avoid it drying out. Most mole recipes don’t call for the meat to be treated with a dry rub first, but I think it imparts the turkey with a extra burst of flavor that is worth a bit of effort. Since I was using turkey, I shredded the meat before tossing with with sauce. If you were making it with chicken pieces, you could simmer the cooked pieces whole in the sauce if you’d prefer. This mole isn’t super spicy but it is very well flavored and complex.

I created this recipe for red mole to incorporate all of my favorite bits of different red moles I’ve had over the years and used pepitas, plantains, roasted tomatoes and various chiles rather than making a super strict Coloradito Oaxacan mole (which normally has French bread in it and no pepitas). Which isn’t to say it is totally inauthentic, just a slightly looser interpretation than the moles I’ve made in the past.

Suggestion: the recipe for the sauce might yield more than you need to coat the turkey. Reserve it and any leftover turkey for enchiladas the next day.

*If you are interested in learning more about traditional Mexican cooking, even if you are like me and not a recipe follower, The Art of Mexican Cooking by Diane Kennedy is an excellent resource of the spices, fruits, vegetables and flavors of the region.