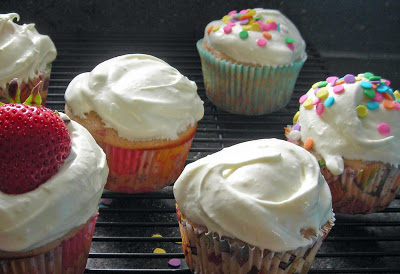 Directions:
Beat the egg whites and salt to soft peaks using an electric mixer. Meanwhile, in a medium saucepan, bring sugar, thyme, zest and water to a boil, stirring occasionally. Continue to boil until it reaches soft ball stage (when a drop of the syrup forms a soft ball when dropped in cool water)while continuing to stir occasionally. Strain and discard the zest and thyme. Keep the mixer running (you need a stand mixer or a friend to complete this next step safely) while you pour a continues stream of the molten syrup into the egg whites. Continue to beat for about 5 minutes, adding lemon juice after about two minutes, or until the frosting is fluffy, glossy and cool. Frost cooled cupcakes or cake. 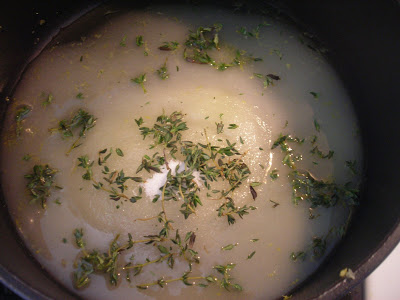 A lemon and thyme infused satiny fluffy icing. Boiling the thyme, lemon and sugar together really infuses the icing with a true to life flavor that would be hard to replicate in other forms of icing. I’d almost call this frosting sophisticated, the kids might like it but it definitely has a grown up vibe. I used it to frost cupcakes, but I think it would also be good on an old-fashioned layer cake. My husband thinks it is so good, he’s been sneaking spoonfuls of the leftovers and eating it straight out of the bowl.