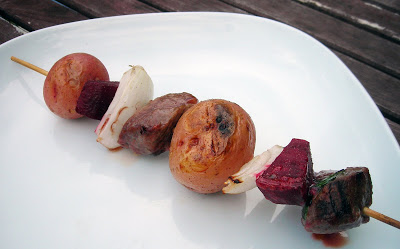 Directions:
At least 1 hour (and up to 6) before serving, place the marinade ingredients in a resealable bag with the beef cubes and marinate.

Soak wooden or bamboo skewers in water for 30 minutes before use.

Bring two pots of water to boil. Drop the potatoes in one, then beets in the other. Return the pots to a boil and boil the potatoes and the beets for about 5 minutes or until just tender. They should be soft enough to be easily skewered but not falling apart or mushy. Drain and pat dry. Drizzle with olive oil. Thread on skewers, alternating with beef, slices of onion, potatoes and beets. Spread the skewers evenly over the grate, cook for a few minutes on each side until the meat is cooked through and everything is browned. If the pieces are on the large side, you can cover the grill for a few minutes to help speed up the cooking time, but the whole process shouldn’t take more than 12 or so minutes, start to finish. 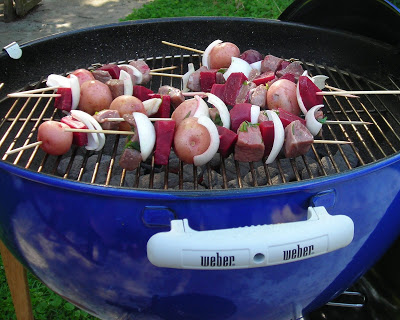 No grill? This recipe works great on a grill pan or under the broiler.

*If you can find very small beets, boil them whole, then rub the skins off with a paper towel before skewering.

Quick note: To make things even easier, you can pre-boil the beets and potato the day before and refrigerate them until you are ready to cook.

The trick to kabobs is selecting vegetables and meat that are roughly the same sized and which will take roughly the same amount of time to cook. The La Cense beef I used was pre-cubed and meant for use in kabobs, but unfortunately the pieces ranged wildly in size-some were very small (many were 1/2 inch or even smaller) or angular (1 1/2 inch on one side, 1/4 inch on the other) while others were quite large and thick. To make these flavorful kabobs I had to pick out the most uniform ones and match them with similarly sized potatoes and beets. I then made tiny meat-only kabobs out of the pieces too small to pair up.

I parboiled the potatoes and beets to insure that they would be completely cooked through by the time the steak was done. Grass fed beef like La Cense is often lower in fat than other beef. Even rare, I found that Le Cense tends to be on the dry side so I was extra cautious not to over cook the meat. However, if I made this again with another brand of beef I would still pre-cook the beets and potatoes. It really made a difference, they were crisp on the outside but moist and tender on the inside; exactly what you would want from beets and potatoes. The potatoes and beets really stood up to the strong flavors of the meat and made a hardier than usual kabob.