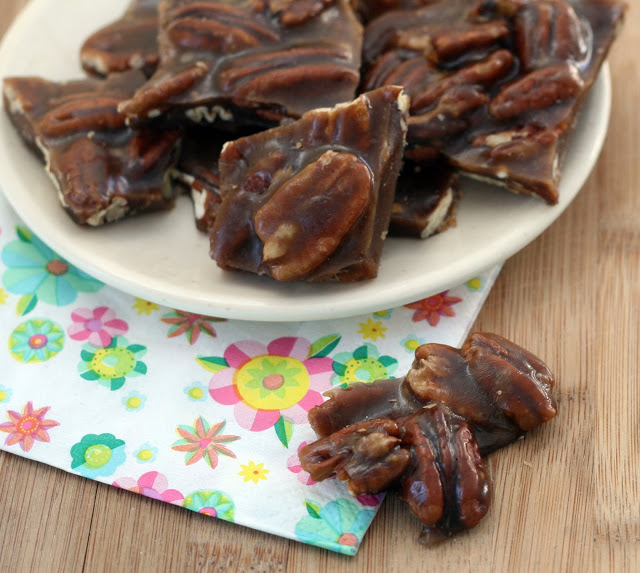 Directions:
Line a baking sheet with parchment paper. Set aside.

Bring the sugar, corn syrup, butter and root beer concentrate to a boil in a medium sauce pan. Continue to cook, stirring occasionally for 10 minutes or until the mixture darkens and a drop of the mixture dropped into a cup of ice cold water hardens instantly. Stir in baking soda. Fold in pecans.

Immediately pour the mixture onto the lined baking sheet and use a spoon to create a layer between 1/8-1/4 inch thick. Allow to cool completely. Break into bite-sized pieces.

McCormick contacted me recently about developing a recipe for their 125th anniversary using their original product, root beer concentrate. In 1889, 25 year old Willoughby M. McCormick was selling root beer extract door-to-door here in Baltimore. I’ve always had a fondness for McCormick, since it is based here in Baltimore and when the spice plant was downtown when I was very young, you could smell the spices wafting over the harbor. We’ve always used McCormick growing up and in fact, when I told my mother about the root beer project she told me that my Grandpop (born in 1914) had told her about his aunt Hilda making root beer at home and what a treat it was. I bet that was made using McCormick concentrate! Buying soda at the store was expensive so it was popular to make your own at home. How fun is that?

While root beer is tasty on its own, I wanted to take the flavors of root beer and transform them into something new. I thought about making peanut or almond brittle with it but then a friend suggested I use pecans instead. I’m glad I did! It gave the brittle a richer flavor and the pecan paired nicely with the root beer. I can’t stop eating it.

Check out McCormick’s Flavor Together project where you can share your flavor story in honor of their anniversary. Share your own unique flavor story by commenting on this post using the hashtag #flavorstory and be entered for a chance to win a McCormick Anniversary Pack. The pack includes exclusive McCormick Anniversary Edition product (both black pepper and vanilla extract – not available in stores!), a McCormick recipe book, and a branded canvas tote – all valued at $50.