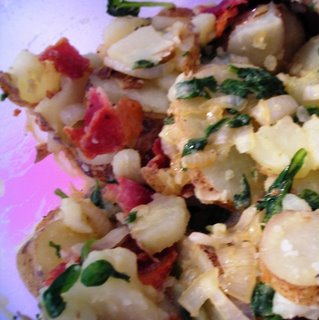 Directions:
Begin by making the dressing: in a large bowl, whisk together the oil, sugar, mustard, 2 tablespoons vinegar, lime juice, salt and pepper, set aside. In a large pot, bring potatoes and enough water to cover them to a boil. Continue to boil and cook the potatoes until tender, about 6-8 minutes. Add spinach to last minute of boiling. Meanwhile, brown bacon in a large pan. Remove bacon and drain, reserving 1 tablespoon of bacon fat. Return the fat to the pan and add the onion. Saute for about 8-10 minutes or until the onion is soft but not quite brown. Add 2 tablespoons vinegar to the onions, stir and cook about 30 seconds. Drain potato and spinach when the potato is tender. Pour the potato/spinach into the large bowl with the dressing and toss to coat. Pour the onion mixture over the potatoes and gently fold in. Serve warm.

I have seen similar potato salads referred to as “German Potato Salad” but they never seem to call for anything green. I like to add spinach to potato salads because one, it is tasty and two, I can trick myself into thinking I’m eating a serving of vegetables. Actually even though this recipe calls for bacon, it is not quite as unhealthy as it could be as long as you use lean bacon and only one tablespoon of the fat. Divided among 8 or so servings that’s not much at all. The addition of lime to the dressing also helps keep it light and fresh tasting.