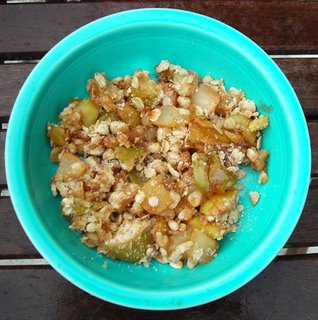 Directions:
Preheat oven to 350. Grease and flour or spray with cooking spray with flour one 9 inch pie plate or a 8×8 baking dish. In a medium bowl, mix together the apples, pears, brown sugar, cinnamon and corn starch to make the base. Pour and spread evenly over prepared baking dish. In a small bowl, stir together flour, butter, brown sugar, cinnamon and oats until a coarse meal forms. Sprinkle evenly over the fruit mixture. Bake 30 minutes or until the fruit is soft and bubbly and the top is lightly brown. Serve warm.

*I used Granny Smith apples but any baking apple would work.
**I used Barlett pears but Bosc or Anjou would be yummy alternative.

There is a bit of damp coolness in the air that I haven’t felt in a long time. It seemed to call out for a warm fruity dish of some sort. We had some pears that were in danger of spoiling so I came up with this as a way of both using them up and creating a yummy breakfast.I love how the brown sugar carmelizes and how the sweet fruit contrasts with the crisp oats. For those of you interested in that sort of thing, the difference between a crisp and crumble is highly debated as they are both fruit dishes with a crumbled topping, but since in this recipe the topping is very crisp (quite unlike that of the topping on the divine apple crumble I made a while back) I believe I am correct in calling it a crisp.