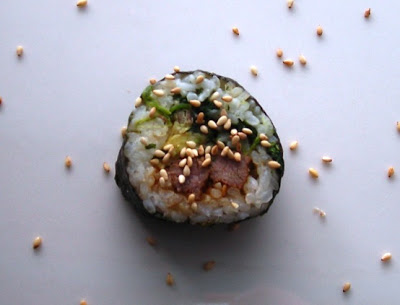 For the meat:
Marinate the meat in the marinade about 1-2 hours or overnight. I would use this time to make the sushi rice. Afterward the meat is done marinating, saute the meat in a large pan until cooked through.

For the omelet:
In a small bowl eat all omelet ingredients* together. Heat a non-stick skillet over a medium-high flame. Add egg mixture and tilt in a circular motion to coat the surface of the skillet. When the egg is almost set, but still a bit runny on top, use a spatula and chopsticks to roll the omelet into a tight cylinder. Remove from pan and slice thinly.

For the spinach:
Microwave frozen spinach, sesame seeds, and salt until the spinach is defrosted. Squeeze out liquid. Add sesame oil, stir and set aside.

Follow the fotomaki instuctions placing the beef, egg, spinach and sesame seeds in the middle of the roll. Brush the outside of the roll with sesame oil and slice. Sprinkle with additional sesame seeds and serve.

*We added the mushrooms and green onions for extra color and flavor, but you can leave them out make it a plain omelet.

I have heard kimbap described as “Korean sushi” but this is not exactly an accurate description. Like Japanese maki, they are rolls with a filling in the middle, surrounded by rice and wrapped in seaweed but what goes in them is often very different. For example kimbap is made with cooked ingredients instead of raw fish, unlike many varieties of maki. The most common fillings include beef or tuna, spinach, egg, carrot and some times strips of yellow pickled radish, or burdock root and the outside is brushed with sesame oil. Another difference is that you don’t dip it in soy sauce like you do with Japanese sushi. The amount of rice vinegar in kimbap rice is often less than what you could use in sushi rice, especially if you are using pickled ingredients and some recipes leave it out all together, and just season the rice with sesame oil and salt. Since kimbap is cooked, it makes a very filling snack or make ahead lunch and if you wrap it tightly, leftovers can be eaten the next day.