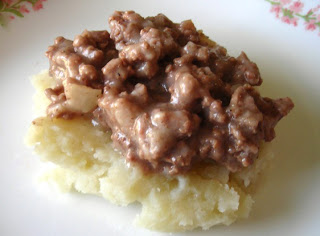 Directions:
In a small bowl, whisk together the flour and water to form a paste. Set a side. In a large skillet or saucepan, heat the oil. When the oil is hot, add the onion and saute about 5 minutes or until softened. Add the ground beef and saute, breaking up any large chunks with your spatula, until almost cooked through. Drain excess fat if necessary. Stir in the flour/water mixture. This will thicken the juices to form a sauce. When the meat is cooked through and the sauce has thickened, add salt and pepper to taste and serve over mashed potatoes or egg noodles. I like it with mashed potatoes best.

*This is not the recipe to get creative with your mashed potatoes. A little milk, maybe some butter, mash with a potato masher, that’s it.

Ellie is hosting a fun food blogging event that’s all about nostalgia. I have a lot of memories surrounding food and some of my favorites are of my grandpop’s cooking. My grandfather lived in a separate apartment in our house when I was growing up, and while we didn’t share meals, he always ate dinner early and made enough extra for me have some as an after school snack. My favorite foods he made were stew (using up leftover vegetables), pan fried chicken thighs with home fries and ground beef gravy. The sort of wholesome, thrifty fare you would expect from someone born in 1914. Recently my mother has been experimenting with recreating some of his special dishes as he is not cooking as often as he used too, and started with ground beef gravy. I have never been able to find much mention of origins of ground beef gravy but it strikes me as one of those meat stretcher dishes that became so popular during the Great Depression and then again during WWII. It is basically ground beef and onion, thickened slightly with flour and served over mashed potatoes or egg noodles. It doesn’t sound like much, but it is oddly comforting. Some times Grandpop would vary it a bit, adding bacon to the meat or even a sprinkle of bouillon, but simple is best.