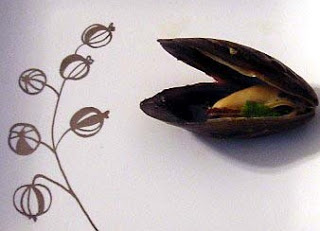 Directions:
Mix the butter and the flour together in small bowl and set aside. Check the mussels to make sure no shells are broken and all are closed. If a mussel is open, tap a few times on a hard surface. If they close, they are safe to eat. If they remain open, throw them out. Place the mussels, 1/2 of the sliced onion, the garlic, the thyme, the sage, and the broth in a wide pot with a lid. Bring to a boil. Cook for 3-5 minutes stirring occasionally until the mussels open. Some mussels might open before others depending on where they are in the pan. Use a large spoon to scoop out the mussels as they open and place them in a serving bowl. Throw out any mussels that did not open. Strain the broth through cheese cloth (or a damp paper towel) draped over a strainer and reserve the broth.

In the same pan you cooked the mussels in, saute the bacon. When just browned, toss in the rest of the sliced onion and the mushrooms. Cook about 5 minutes until the onions and mushrooms have softened and have started to caramelize in the bacon grease. Pour in the beer and 1/2 cup of the mussel broth. Bring to a boil and whisk in the butter and flour mixture. Cook until thickened, about 10 minutes. Add the mussels back in the pot and toss them in the sauce. Bring back to a boil and remove from heat. Serve with bread to soak up the sauce.

This is one of the best meals I’ve had in the past year. I honestly have never had better mussels. The flavor of the beer isn’t overpowering and the mussels still taste of the sea. The sauce is wonderful and great for dipping crusty bread. It would probably be more traditional to serve this with some frites but we had my favorite potatoes instead. I wish we could have this for dinner again tomorrow night.