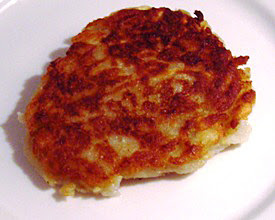 Directions:
In a medium bowl, mash the cubed potatoes with the buttermilk. Add the grated potato, flour and baking soda and stir to evenly distribute. Heat 2-3 tablespoons of butter or oil in a large skillet. Meanwhile, form the mixture into 1/4 cup patties. Pan fry about 5-8 minutes on each side or until golden brown and crispy. Serve hot as a side dish.

I had never heard of a boxty until one day when we went to a new Irish pub that opened not far from our home. On the menu they had a selection of boxtys (boxties?) which they described as a “Irish pancake” that were wrapped around a variety of fillings including seafood, chicken and Guinness stew. I tried the seafood one and swooned. However, when we went back, I ordered it again but it just barely edible. Long story short, we have no plans of returning. But I’ve missed my boxty. I’ve done some boxty research and found out that a boxty is sort of like a latke but made with a mixture of grated and mashed potato. They can be small and compact and served as a side dish or large and floppy and served wrapped around a tasty filling. This recipe makes the patty style but if you thinned it out with some milk and added a couple of eggs, you could make a thinner batter that would make boxty flat enough to stuff. We served it as a side to the Irish-American classic corned beef and cabbage.
As a side note I also found this funny boxty rhyme: “Boxty on the griddle, boxty in the pan, If you can’t make boxty, you’ll never get your man”. Who knew?