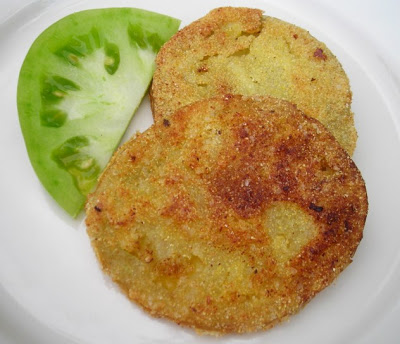 Directions:
Soak the tomato slices in the buttermilk for 20-30 minutes.Meanwhile heat a 1/2 inch of oil in a frying pan. Pour the cornmeal, cornstarch, salt and pepper on a plate and stir to combine. Dip both sides of each tomato slice in the mixture. Add to the hot oil and cook until golden brown on both sides, flipping once, about 8-10 minutes. Remove to paper towel lined plates, blot and serve hot.

*If you really want to be decadent, add a couple tablespoons of bacon grease to the oil.

I’ve always thought about making fried green tomatoes, but never followed through on the urge until today. My deep love for homegrown tomatoes has always prevented me from picking tomatoes from my own garden before they had ripened and my thrifty nature prevented me from buying green tomatoes from the farmers market when I could pick them for free, at home. Then yesterday I had a stalk loaded down with green tomatoes break off from the plant and didn’t want them to go to waste so I thought I’d fry them up.There is a limit to what you can do with an unripe tomato-the flesh is fairly firm, and while it is low in calories and high in nutrients; you don’t really want eat it raw. No wonder the traditional thing to do with green tomatoes is to fry them. It cooks them just enough that they aren’t too crunchy, but they still retain a certain toothiness that contrasts nicely with the thin, brittle crust. They are also slightly tart but have none of the bitterness you sometimes encounter with fried eggplant. div>