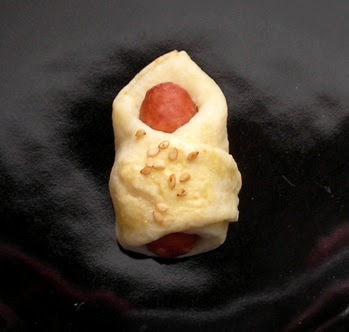 Directions:
Preheat oven to 350. Line two baking sheets with parchment paper. Place the flour, baking powder, salt and sugar in a food processor. Pulse until well mixed. Add the butter and pulse until it is incorporated but the mixture not totally smooth. Add the milk and egg and pulse until the dough comes together into a somewhat sticky mass. Remove to a floured surface. Knead slightly and sprinkle with additional flour if the dough seems overly sticky. Roll out into a rectangle about 1/4 inch thick, about 12×14 inches. Slice the dough into approximately 12-15 squares. Cut each square in half diagonally. 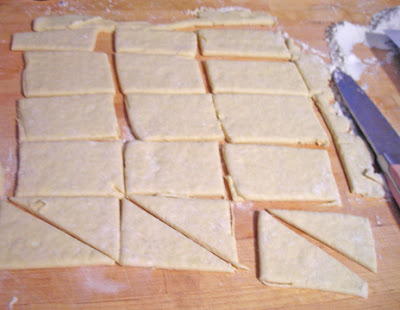 Place the triangle of dough so that when it is facing you, it looks like a pyramid. Place the sausage in the middle and fold each narrower point over the sausage in a criss cross fashion. 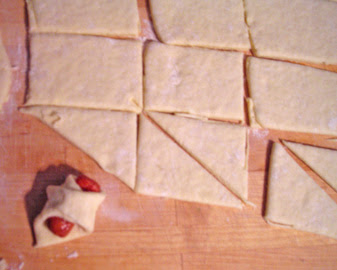 Place on a baking sheet. Repeat for remaining sausages, placing them about 1/4 inch apart on the baking sheet. Brush with the beaten egg and sprinkle with sesame seeds if desired. Bake 12-15 minutes or until the dough has puffed and the bottoms are golden brown. Serve hot. 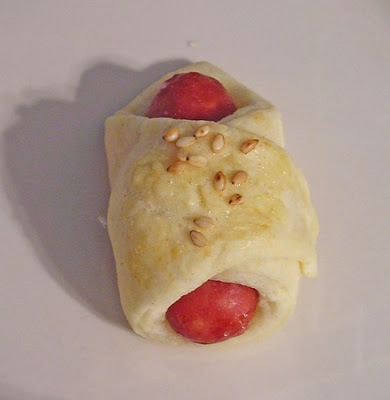 *I used a 14 oz pack of beef Hillshire Farms Lit’l Smokies (is that an embarrassing product name or what?) and had some leftover. Honestly, any small sausage would do.

After doing a quick Google search I found out some interesting things about the ubiquitous appetizer pigs in a blanket. First, most people seem to use cans of biscuit or pizza dough or crescent rolls. Which, to me is a mistake, making, rolling and cutting out the dough only took about 10 minutes, tastes much better and has none of those icky chemicals they put in commercial refrigerated dough. Secondly, pigs in a blanket are not sausages wrapped in biscuits in all parts of the world. Some times they refer to meat wrapped in cabbage, or sausages wrapped in bacon. Thirdly, pigs in a blanket are some times called franks in the jackets or biscuit dogs. Biscuit dogs! How cute is that? I do sort of think the pigs in blankets name is a bit of a misnomer, the biscuit does look like a blanket but when I’ve had them, the sausage is normally beef, not pork. Anyway, last night I suddenly had a craving for pigs in a blanket. Which is a little odd, as I normally don’t eat them in party situation much less on a random Friday at home. Matt was game and picked up some sausages on his way home from work. He even offered to mix the dough since I wasn’t feeling well. We decided on our favorite biscuit recipe and about 5 minutes later the dough was rolled out and I started slicing. It only took a few minutes wrap all of the sausages and place them in the oven to bake. And when they came out? Crispy, tender and delicious. Much better and fresher tasting than the frozen or crescent-wrapped ones I’ve had in the past. So, maybe for your next party, you’ll take a couple of extra minutes and make them from scratch. You’ll be glad you did.