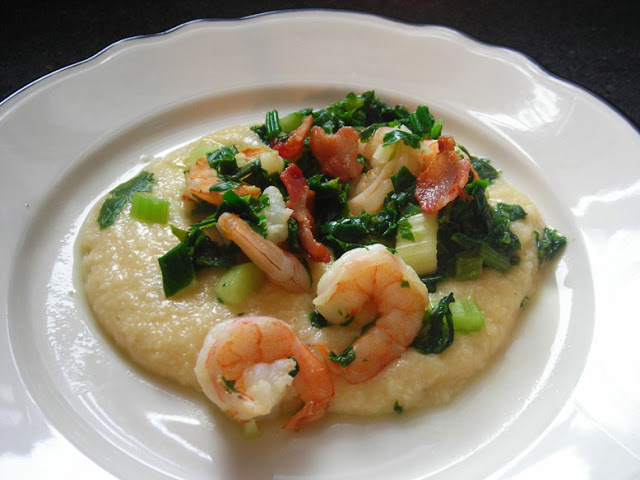 Directions:
In a medium pot, bring the broth to a boil. Add the grits and stir continually** for about 10 minutes or until all the broth is absorbed. Remove from the heat and stir in both cheeses. Keep covered until ready to serve.

Meanwhile, fry the bacon in a large skillet until crisp, then drain on a paper towel, set aside. Leave about 2 tablespoons of drippings in the skillet. Add the shrimp and saute for 1 minutes, then add the garlic, lemon juice and celery. Cook until almost totally pink and cooked through, then add the spinach and green onions. Cook 2 additional minutes or until the shrimp is totally cooked and the whole mixture is hot.

To serve: arrange some grits on a plate, top with the shrimp mixture. Sprinkle with the leftover bacon bits (optional) and serve hot.

*If you can’t find grits, try substituting some stone ground polenta. Polenta is made with golden corn and grits with white corn (or hominy or a combination of the two) but they are very similar. Purists might tell you different, but if it is a matter of not making the recipe due to a lack of grits and you have polenta-use the polenta.

**Well, fairly continually anyway, you don’t want lumps. The trick is to have all of you ingredients ready to go, so while you are making the grits, you can make the shrimp part at the same time with minimal interruption to your stirring. Or better yet, draft someone to stir while you do the rest.

Grits are not something I grew up eating, but after having them a few times, I was hooked. Even though Maryland is south of the Mason-Dixon, it isn’t exactly grits country. You can find them on the shelves without much trouble, but they are not a staple like they are just a few states away. For this recipe, I combined all of my favorite ways to eat grits: under shrimp and cheesy into one perfect meal. I added more vegetables that I’ve typically found in shrimp grits to make it more of a complete meal, but I think that both those new to grits and devotees will be satisfied. The grits are cheesy but not so much that they overpower the delicate shrimp. You can skip the whole bacon part but it really does add a smoky flavor that is wonderful. Just saute the shrimp in a little olive oil instead. I will say that not only is it an exceptionally tasty dish, that despite the cheese and the bacon, it is very light tasting meal.