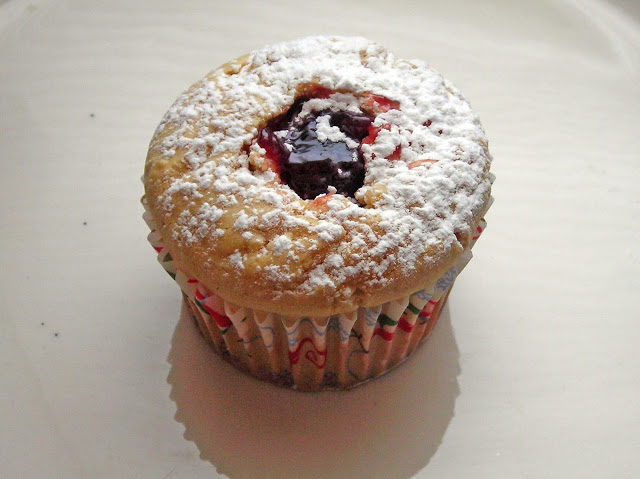 Ingredients:
1 cup flour
1/2 cup light brown sugar
½ cup milk
1/4 cup butter, at room temperature
1 egg, at room temperature
1 teaspoon vanilla
1 teaspoon baking powder
½ teaspoon lemon zest
1/4 teaspoon saltgood quality red jelly (any flavor)
powdered sugarDirections:
Preheat the oven to 350. Grease and flour or line 6-8 wells in a cupcake pan. In a large bowl, cream together butter and sugar until light and fluffy. Add egg, vanilla, zest and milk beat well. Add the flour, baking powder and salt. Beat until the batter is light and fluffy. Fill each well 2/3 of the way filled. Bake approximately 15 minutes or until a toothpick inserted in the middle of the middle cupcake comes out clean. Cool on a wire rack and take a small corer, knife or melon baller and scoop out some of the center of the cupcake. Fill with jelly (I just spooned it in). Sprinkle with powdered sugar.

I’ve been toying with the idea of making a jelly doughnut cupcake for a while. I knew what it would have: a soft vanilla dough, a touch of confectioners’ sugar but I never quite got around to making them. When I finally did, it was a relief. They came out just as I hoped, tasting surprisingly like a doughnut and not too sweet. And they were surprisingly easy to fill with jelly. I skipped the pastry bag and just scooped a tiny amount of jelly into the hole and then added more if needed. Easy peasy.

While not strictly traditional in cupcake form, jelly doughnuts called sufganiot are a Hanukkah treat that is especially popular in Israel. I thought about making sufganiot the traditional way with a yeast dough and uh, as a doughnut but I just didn’t have the time for the two rises and the frying. I do realize that turning it into a cupcake skips over the whole deep fried aspect of Hanukkah foods (the custom of eating fried foods is in commemoration of the miracle of Temple oil) but they are a bit healthier for you and just as much fun. Not to mention the fact that you can eat them after the latkes and not feel quite as guilty for indulging in two fried foods in one day.

Beyond Hanukkah, I think these would be especially fun served at a bunch- dessert and breakfast all in one.