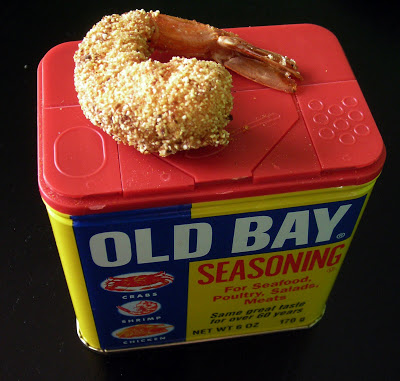 Directions:
Whisk together the salt, pepper, Old Bay, and cornmeal. Pour into a shallow bowl and set aside. Beat an egg in a second bowl. Heat about 1 1/2 inches of oil in a large saucepan or skillet, enough to cover the shrimp. Dredge the shrimp in egg, then dip into the cornmeal mixture. Make sure all sides are coated. Heat about 1/2 in oil in a large pan. Drop in a single layer into the hot oil and cook about 3 minutes or until crisp and cooked through. They should sink then you put them in, then float when cooked. Drain on paper towel lined plates. Serve hot.

To me, nothing says “Summer” like Old Bay whether it is in steamed crabs, potato salad, shrimp salad, sprinkled on french fries or deviled eggs. I had never made fried shrimp before but it couldn’t be easier. I used a large fairly shallow skillet and was able to cook most of the shrimp at the same time and they didn’t need to be flipped so it was even easier than most things to pan-fry. As for the shrimp themselves? The greaseless* outside was perfectly spiced by the Old Bay, is crisp while the inside is bursting with sweet juicy shrimp flavor.

*The trick is to make sure the oil is really hot before adding the shrimp. If it is too cool, the food will absorb the oil.