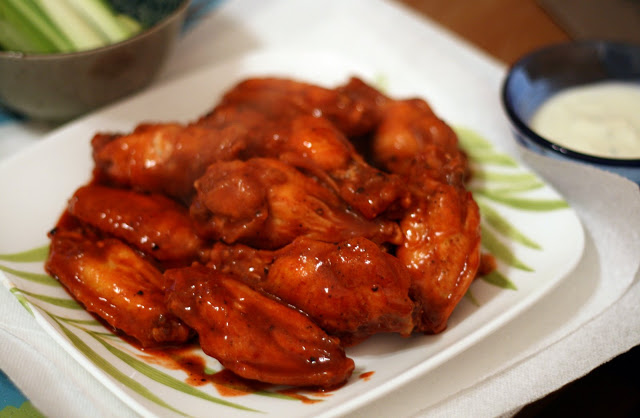 Directions:
Sprinkle both sides of each wing part with salt, pepper, cayenne pepper and the flour. Set aside. Heat 2 inches oil to 350 degrees in a very large, heavy pot or frying pan. You can test the oil by inserting a chopstick straight down into the oil. If the oil is hot enough bubbles will form vigorously up the chopstick. When the oil is hot enough put all the wings in at once. Carefully stir the wings so they do not stick together. Cook until they are golden brown, and then continue to cook them a couple of minutes more. Under cooked wings can be unpleasantly chewy. Scoop wings out and put into a large bowl and toss with the wing sauce. Serve immediately with generous servings of blue cheese dressing and celery. Lots of napkins couldn’t hurt either.

*We use one cup of Anchor Bar Hotter Buffalo Wing Sauce and one cup Anchor Bar Suicidal Buffalo Wing sauce whisked together. The Hotter has a better flavor but the Suicidal is really hot so together they make the perfect sauce! You can find it at your local grocery store and I bet the Anchor Bar website would also sell it.

In 1963 Wondra flour was introduced and then in 1964 the Anchor Bar in Buffalo, New York served their first batch of buffalo wings. I am not sure if they used Wondra flour in that first batch but we love using the super fine flour (also known as “instant” or “gravy” flour) to coat just about any fried food. It coats the wing and allows the spices and sauce to adhere without adding breading. Now I am not a big one for gnawing food off teeny tiny bones but Matt assures me that this recipe is a winner, he had tried several times to make the perfect wing and came close. He didn’t believe me when I said that I thought adding a bit of flour would make the difference but it did, it didn’t add bulk, just crispness and the sauce and spices stuck on right away.