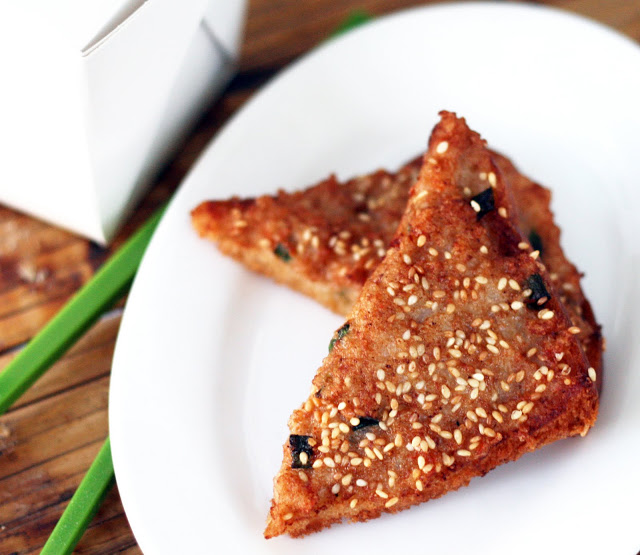 Directions:
Cut the bottom crust off the bread. Place the water chestnuts in a food processor. Pulse until coarsely chopped. Add the spices, shrimp, sesame oil and egg white. Pulse until it forms a chunky paste. Transfer to a bowl. Stir in green onion. Spread each piece of bread with the shrimp mixture. Sprinkle with sesame seeds. Cut into 2 or 4 triangles or leave whole.

Heat 1/4 inch oil in a skillet or wok to to 350. Fry the triangles shrimp side down until pink and golden, about 1-2 minutes. Flip and fry the other side until golden, 1-2 minutes. Drain on paper towel lined plates. Eat immediately or keep warm for up to 30 minutes in an unpreheated 200 oven.

When I was child, we would only on the rarest of occasions get takeout of any kind and Chinese was always my favorite. The place closest to us was one that my mom had been going to since she was a teenager and had good entrees but great egg rolls and shrimp toast. The shrimp toast was a whole smallish slice of bread with minced shrimp spread on top and then deep fried. It was seldom greasy and as an occasional treat, quite exciting. I live too far from that place to get takeout from there now so whenever I feel nostalgic, I try an order from whatever joint we’re trying out at the time (if only we could find a place we like with consistent food!). There is one place fairly close by that makes a good, chunky shrimp toast cut into small triangles and dotted with sesame seeds. I hadn’t had it with sesame seeds before but quick googling told me that this is apparently a common way to make it in UK. For all I know, it is common in the US as well, but I’ve only encountered it at this one place. Anyway, as I am wont to do, I got to thinking about making shrimp toast at home so the next time we got takeout, I got an order to see if I could figure out what went into it. While I really hate the texture of water chestnuts, the slight crunch I’d encounter in an occasional bite made them think they might be present as, perhaps unsung, secret ingredient in shrimp toast. I thought I detected some shaoxing and ginger but beyond that, I was uncertain.

I still wasn’t sure how the mixture stayed together but when I saw shrimp for a great price, I bought some, picked up some water chestnuts and thought I would just wing it. As it turns out, all you really need are some shrimp, water chestnuts, a bit of flavoring (shaoxing, a touch of ginger), a quick pulse in the food processor and you have a shrimp paste that is thick and sturdy enough that it would stick to the bread and not flake off into the oil when it was fried. I had thought I’d have to add something to make it all stick together but apparently not. I was glad I didn’t have to add more egg or cornstarch than I did, I didn’t want it to taste eggy or powdery. Since I was making it at home, there was no need to deep fry, a shallow pan of oil is well enough. I made a couple whole slices, a couple cut into 2 triangles and some in 4 triangles and like the 2 triangles the best. A satisfying amount and a good ration of insides to crispy edges. I added the sesame seeds mostly so it was more interesting looking than a flat, brown triangle but it did add a pleasant note of sesame I think went well with the other flavors. So, impress your friends and make shrimp toast at home. It is surprisingly easy and delicious.

Note: Leftovers are best stored in an air tight container in the refrigerator. The next day they reheat pretty well on a paper towel lined baking sheet @ 350 for about 8 minutes.

Also, if you happen to have some shrimp paste leftover (you shouldn’t but bread slice sizes vary) I bet it would make a great dumpling filling. Presuming you have or want to make dumpling wrappers.