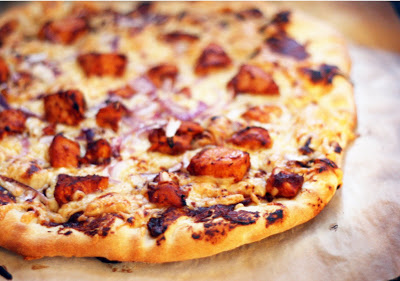 Directions:
For the barbecue sauce: Pulse all ingredients in a blender until smooth. Pour into a small saucepan and simmer on the lowest setting until heated through. Allow to cool.

For the pizza: Place the chicken in a resealable bag with about 1/4 cup of the sauce. Refrigerate for 15-30 minutes. Heat oil in a skillet. Saute the chicken until just cooked through. Mix the two cheeses together in a small bowl. Spread about 1/4 cup of sauce on each pizza. Top with the cheeses then onion and chicken. Follow the pizza directions for baking. Sprinkle with cilantro prior to serving if desired.

When I was in college I loved this barbecue chicken pita this one locally owned restaurant served. It had a not too sweet sauce, red onions, Gouda and a sprinkle of cilantro in a homemade pita. I must have eaten that at least once a month (and often more) for a year or two. The place also sold a lot unusual pizzas (and oddly, Egyptian food) and had a similar pizza version on the menu but I didn’t like it as much as the sandwich. I think their ratios were slightly off. I stopped ordering the sandwich after a there was some staff turnover and it just wasn’t as good any more. But I’ve sort of missed it. I was going to try and recreate the sandwich (but better!) but I thought I’d try to make the pizza instead. That really stuck out as something I thought would be amazing but was kind of sub-par. I knew I could do a better job! I started with homemade barbecue sauce that was slightly thicker than what I might want to use on say, ribs, as both a sauce and marinade for the chicken. I also used smoked Gouda instead of regular for extra depth of flavor. Gouda isn’t the meltyest cheese so I mixed with with a bit of mozzarella to ensure maximum pizza coverage. The perfect barbecue chicken pizza.