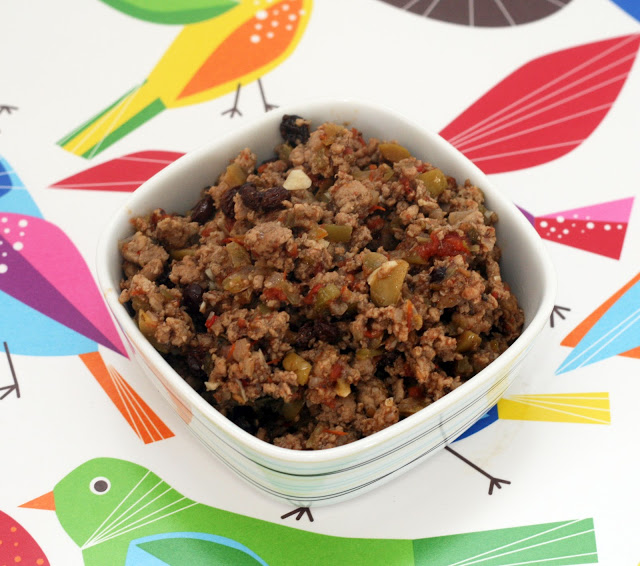 Directions:
Saute onions and peppers in olive oil in large skillet until onions are translucent, about 5 minutes. Add the garlic, turkey, and ground spices. Saute until the turkey is brown, breaking up any large pieces with the back of a spoon. Add fresh oregano, pepper sherry, and tomatoes. Cook on medium heat for 15 minutes uncovered. Add olives and currants and cook for 5 more minutes. At this point, the liquid should have reduce so the dish looks well sauced but not soupy. If there is too much liquid cook for an additional 5 – 10 minutes or until the liquid reduces further. Serve over white rice.

Matt is always trying to come up with new things to pack for his lunches during the week. He makes a lot of rice cooker meals but occasionally branches out into skillet meals that reheat well. This is what he came up with for this week. It is lighter version of Cuban picadillo (turkey instead of ground beef) and there some adjustments for personal taste like zante currants instead of raisins and our favorite cubanelle and Anaheim peppers instead of  bell peppers but it tastes very much like the real thing just a bit sharper. Of course, you don’t have to make this for lunches (we got 3-4 days worth of lunches out of it),  it makes a great quick dinner as well.

Note: Normally I would serve this over/with rice but Baltimore had a horrible storm this weekend and while we had power, we ran out of rice and on the way out of the neighborhood, someone hit my car. We’re fine but the car isn’t so no rice was purchased in time for the picture. But serve it on rice!